All Change For The Rodney Parade

All change for Munster for the clash with Dragons at Rodney Parade with just three of those who started against Leinster last weekend retaining their places in the starting XV for this evening’s RaboDirect PRO12 encounter.

In the past Munster might have used this game, just eight days ahead of a Heineken Cup semi as preparation, and fielded their strongest side. However, given they’ve just come off the back of two intensely physical encounters first against Harlequins and then Leinster, it seems eminently sensible that most of their front-liners are given the time to rest battered bones.

And that provides Ian Costello with an opportunity then to further expose a number of the players, he’ll use in the British & Irish Cup semi-final clash with Leinster, to RaboDirect rugby. Try scorer against Cornish Pirates, Ronan O’Mahony makes his first start at senior level and Cian Bohane is named in a senior match day squad for the first time.

JJ Hanrahan gets his fourth start of the season while there’s a welcome return to the starting line up for Niall Ronan whose last start was against Ospreys in September.

In total there are probably 13 of the 23 who Costello will have when they take on Leinster this day week in Limerick.

Meanwhile lock Andrew Coombs will lead the Dragons in a game that sees two Rodney Parade favorites Dan Lydiate and hooker Steve Jones play their final home game for the Men of Gwent.

As this game in RodneyParade headed for the hour mark you might have given Munster little chance of salvaging anything as they trailed 22-5.

However in the elapsed time, they had shown enough to suggest that if they could just cut out the errors then respectability if not salvation could be at hand.

And so it proved.

It started when debutant Ronan O'Mahony – who had shown good pace all evening – skipped in on the left and continued with a try from replacement CJ Stander six minutes later. That score heralded a goal line brawl, the result of which was a harsh yellow card for Damien Varley and a penalty restart to the Dragons after Ian Keatley had kicked the conversion.

Reduced to 14 for the second time in the game, Munster might have been expected to wilt but they didn't. They broke up a Dragons attack on half way and Johne Murphy raced in under the posts, Keatley's conversion edging them two points in front.

From the restart Murphy cleared long downfield but into the arms of the player you didn't want to have it, Toby Faletau. The Welsh international carried strong back into the Munster 22 and two phases later Ross Wardle was dotting down in the Bisley corner.

Tom Prydie landed a further penalty to earn his side some extra breathing space and it ended with Munster once again pressing for a score.

Prydie had kicked his side into a three point lead at the start before Paddy Butler got himself onto the end of a perfectly weighted Ian Keatley cross field kick to score in almost the exact spot that Wardle would score the winner.

But far too often Munster squandered good approach work with errors that allowed Dragons relieve the pressure. Nor did it help that Prydie was on song, his three first half penalties and conversion of Steffan Jones' try leaving Munster with a mountain to climb in the second half.

To their credit they went about that ascent impressively but had to settle in the end for two bonus points. 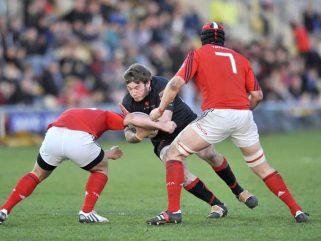