With Saracens pulling off a come from behind win against an ill disciplined Racing Metro in Nantes yesterday, Munster know exactly what they must do this afternoon in Murrayfield.

Going into yesterday’s games, there was the possibility that they could top their Pool One if the won their remaining games starting today in Edinburgh. But now in all probability they’ll have to fight for a best runner up spot along with several others.

Saracens are on 18 points with a home game to come against Munster’s opponents this afternoon and the English club are now a very short order with the bookies to close the deal next weekend.

The snow that’s falling in the Scottish capital this morning is not likely to have much affect on proceedings except perhaps to force the introduction of an orange coloured ball. And the home with nothing to play for other than pride can be counted on to give more than a good account of themselves and their supporters who may in fact be matched in numbers by Munster folk who have descended on the city in their droves.

Four points is a must but not a gimme in the most important game of Munster’s season.

Munster kept their play off hopes alive with a 26-17 victory over Edinburgh at Murrayfield in front of a largely Munster crowd.

It was a win that leaves them in contention for one of the 'best runner-up' places and a possible trip to Harlequins or Clermont but they really need to do next weekend what they failed to do in Edinburgh, win with a bonus point.

They set out by giving themselves the cushion of a lead and led 12-3 at half time but it was the minutes before the break that probably decided their fate.

Camped on the Edinburgh line they probed left and right but were denied and then when awarded a penalty Keith Earls tapped and went but was whistled back because according to referee Greg Gardiner he hadn't given the mark. Mind you later on when Grieg Laidlaw took a quick tap without been given the mark, it ended in a yellow card for Dave Kilcoyne.

Ronan O’Gara opened Munster’s account with an early penalty but Munster put themselves under pressure when an overthrow at a five metre line out followed by a knock on gave Edinburgh a foothold metres from the Munster line.

Superb defence kept the home side at bay and when the siege was lifted Munster went downfield for O’Gara to kick two penalties in the 25th and 29th minutes.

Laidlaw pulled one back three minutes later, a blatant forward pass in the lead-up going unnoticed, but once again when Edinburgh were penalised at scrum time O’Gara landed his fourth successful kick for a nine point interval lead.

Munster were reduced to 14 when Dave Kilcoyne was yellow carded in the 48th minute but they still managed to win a penalty try from a scrum after Grieg Laidlaw was sent to the bin five minutes later.

The outcome was put beyond all doubt when Conor Murray scored his side’s second try in the 61st minute though before that Dougie Fife escaped sanction after deliberately knocking on a try scoring pass from Earls to Simon Zebo.

In the closing stages Munster ran out of gas and Fife ran in a brace of tries which if nothing else served to highlight the wisdom of Munster's early tactics. 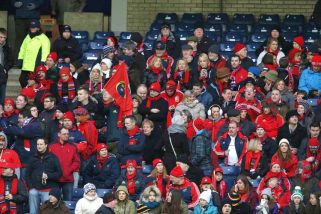