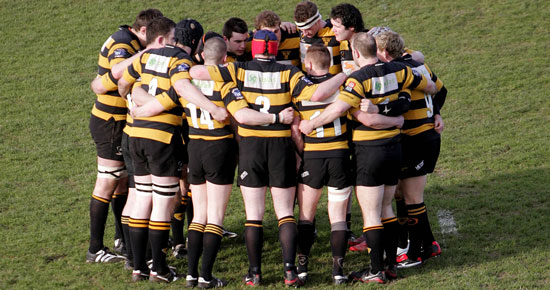 Holders Cork Constitution face Young Munster at Temple Hill but will have to do without several of their Munster fringe players who will be on duty for the province against Ulster. These include Billy Holland, Scott Deasy, Tom Gleeson, Duncan Williams, Peter O’Mahony and Stephen Archer.
Both these sides have impressive runs in the league in recent weeks and this will be a great test for the “Cookies” to play one of the top sides. The odds must be on Con’ booking a final spot but they can expect a difficult test from their Limerick opponents.

The other semi final sees Shannon face U.C.C. at Clifford Park. These sides have met in some historic cup battles. College’s last success in this competition was a 19-3 win over Shannon back in 1981 and Shannon folk still remember the 1960 final when Shannon won the trophy for the first time on a 6-3 scoreline at Thomond Park in a replay after the sides played an 8-8 draw in Cork.
Shannon look like they will be giving Marcus Horan a run after his recent injury and this will be a big boost to their hopes of reaching another Cup final. College have a very inexperienced side this season but they have acquitted themselves well and are still in the hunt for promotion.
This will be a big test for them but Shannon’s experience should see them through.

There are also some vital AIB All Ireland League games down for decision. In Division 1A Garryowen play Dolphin at Dooradoyle. These sides met two weeks ago in the All Ireland Cup semi final where Garryowen had a surprising 16-9 victory.
Despite occupying bottom spot Garryowen will be boosted by that showing and will be confident of picking up the points and moving off the foot of the table against an injury hit Dolphin side.

Clonakilty entertain Thomond in their postponed Second Division tie. Recent defeats have seen Thomond’s promotion hopes fade away, while Clonakilty battling to move away from the bottom of the table, have put in some credible performances in recent games. With home support Clonakilty could pick up the win they need to ease their relegation worries.

The main action on the Junior front is the final of the Junior Clubs Challenge Shield which goes ahead in Charleville on Sunday when Kanturk and Galbally go head to head.
Galbally who must be the team of 2009 with promotion from the Third Division for the first time last April being followed by an unbeaten run in the Second Division and they also added the Garryowen Cup in September with a 15-10 win over Clonmel.
They will go into this tie as favourites following their 18-13 win in the League between these sides back in November.
Kanturk’s inconsistency has seen them drop off the pace in the promotion race in Division Two and they will be looking to make amends with a piece of silverware. On their day they are a match for any side but Galbally’s momentum should see them start the new decade with another trophy.

There are also some vital games down for decision in the Munster Junior League. In Division One, Cobh Pirates play Clonmel at the East Cork venue. Both these sides are just above the relegation zone and both need a win.
Clonmel who were hit by an injury crises at the start of the league seem to be rediscovering their form by that fine 31-12 win over leaders Richmond last day out and will be full of confidence of picking up the points against a Cobh side that are in the middle of team building after a few very successful seasons.

The other game in the top flight is a Tipperary derby when Thurles host Kilfeacle. Thurles are again battling to avoid relegation while Kilfeacle have slipped down the table in recent weeks. Thurles always seem to pull out the results when it matters most and could cause a surprise with a home victory.

There is one game in the Second Division when struggling Ennis host bottom side St. Mary’s. The Saints are looking for their first win since last season’s promotion and know that another defeat will almost certainly mean Third Division rugby again next season.

There is a full program of games in the Third Division. In Section A runaway leader’s Castleisland make the short journey out to the Kerry Gaeltacht to face Corca Dhuibhne. The West Kerry side have shown that they are well able for this Division since moving up to Junior rugby this season but it would be a big upset if they were to end Castleisland’s unbeaten run.

Second placed Presentation travel to bottom side Killorglin and they will be looking to pick up maximum points from this encounter.

Killarney also in the promotion race face a difficult tie away to Abbeyfeale and will want to bounce back to winning ways after defeat by Castleisland last day out.

The other game in this section sees Scariff play host to Kilrush and this could be a very close tie with little between them at the finish.

In Section B leaders Charleville travel to Douglas knowing that the home side must win to keep their promotion hopes alive.

The two sides sharing second place Waterford City and Mallow seven points behind the leaders meet at Kilbarry. Mallow who have hauled themselves back into the promotion race with some impressive performances in recent weeks know that this is tie they can not afford to lose.

Carrick-on-Suir who have slipped down the table in recent weeks will be looking to pick up maximum points from their home encounter with Dungarvan.

In the other tie Fermoy will also be looking to pick up five points from their home game against bottom side Shandon.

There also a full program of games listed in the Northern and Southern sections of the Munster Seconds League as well as games in both the Gleeson League and Junior Two League South.