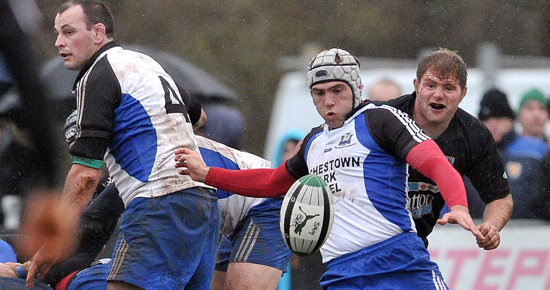 This is the final weekend of the rugby season with the Munster Junior XV bidding to regain the Junior Interprovincial Championship and three Munster sides also aiming to win their respective All Ireland League Division titles.

Cork Constitution travel to Dubarry Park in their bid to regain the AIB All Ireland League Division 1 title when they face St. Mary’s College. The Cork side will have to wait until before kick off before naming their side as they are unsure which of their players will be available, as Munster might require some of them for their Magners League game against Cardiff.
Each side recorded a victory in the earlier rounds. Con’ won their home tie 16-9 and lost away in Templeville Road 24-20.
Con’s experience should see them come out on top in what should be a tight contest and see them bring off the AIB All Ireland League and Cup double.

Bruff play Lansdowne at Old Belvedere’s ground in Anglesea Road kick off 2.00 to decide the Second Division title.
Lansdowne finished top of the Division with fourteen points to spare over second placed Bruff which also included a 54-13 victory over the Co. Limerick side.
Bruff bounced back from that defeat to clinch the second promotion place with some excellent performances that saw them finish ten points ahead of third placed Terenure College.
Lansdowne are the form side and while Bruff should give them a closer run this time, victory will be expected to go to the Dublin side.

Nenagh Ormond take on Queens University in the Third Division final also at Anglesea Road, kick off 12.00.
Queens will go into this tie as the hottest of favourites as they topped the division with a twenty point difference between them and Nenagh.
The Tipperary outfit have been improving every season since their elevation to senior status and will be eager to lift their first piece of silverware as a senior club.
Queens who won the Ulster Senior Cup title last week will start as hot favourites but know they can expect a stiff challenge from Nenagh side as they were pushed hard earlier in the season to defeat them 18-13 having trailed 10-0 at half time.

The final game of the season is the Munster Junior 2 Cup final between Richmond and Cobh Pirates at Annacotty on Sunday. Both these sides won their respective leagues and will be going all out win this trophy for the first time.
Richmond having won the Munster Junior league title would like to add this title to their trophy cabinet while Cobh have had a great season at this level winning the Kelly Cup in mid week and were unlucky to lose to UCC in the Junior Two Cup final by a single point.
It should be a close game with Richmond favourites to edge it.