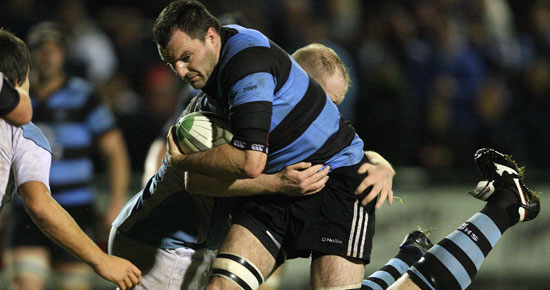 It is the second last series of AIL games today.

In Division 1A leaders Cork Constitution travel to second place St. Mary’s College. Currently the Temple Hill side hold a three point advantage and have a game in hand. A Con’ victory could put a big dent on the Dublin side’s play off hopes.

Defending champions Shannon play Clontarf at Coonagh with both sides needing the points. Shannon occupy third place but need to win to make sure of their place in the play offs. Clontarf are battling to stay in this section and a defeat would see them relegated.

Dolphin in fourth place are at home to Blackrock College and must win to maintain their challenge to finish in a play off place.

Garryowen who are on a good run and could yet make the play offs are at home to U.L. Bohemian. A defeat for the Annacotty side would see them relegated to Division 1B next season.

Young Munster assured of promotion to Division 1A next season are battling it out with Old Belvedere to see who will top Division 1B and a place in the semi finals. They play Galwegians at Thomond Park and should pick up the points.

U.C.C. despite missing out on promotion will be eager to continue their good run with an away win over Buccaneers.

In Division Two Bruff play their final home game of the season when they entertain Bective Rangers. The Co. Limerick side are currently in second place two points ahead of their nearest challengers and a win would them in a strong position to secure promotion.

Clonakilty who are on a late run that has seen them move out of the relegation zone up to the top half of the table will hope to continue that winning run with a victory over Terenure College at The Vale.

The big Limerick derby between Thomond and Old Crescent at Fitzgerald Park is a crucial game for the visitors. Thomond’s win over Old Wesley last day out made sure of their place in the second division next season, but Old Crescent are battling it out with Highfield to avoid the drop. The Rosbrien side have a three point advantage and would like to extend that gap before their final game away to Highfield.

Highfield are at home to Belfast Harlequins and they will be boosted by a fine performance away to Lansdowne last day out. This is a game they must win as results elsewhere could send them down to the Third Division.

Midleton should book their promotion from the Third Division with a home win over Banbridge, the side in third place nine points behind the east Cork side. Despite a defeat away to Portadown in their last game, the home side should make sure of promotion in front of their fanatical supporters.

Nenagh Ormond battling for a top four finish should pick up the points at home to Rainey Old Boys and Sunday’s Well still in with an outside chance of making the play offs face a daunting task away to already promoted Queens University.

Richmond start their All Ireland Provincial League with a home tie against Connacht champions Monivea. They must win this tie if they hope to make a return to the All Ireland League, especially as they face tough games away to Seapoint and City of Derry.

The two remaining quarter final ties in the Munster Junior Cup are down for decision. Cashel are at home to Old Christians and the Tipperary side will be making a big effort to win this Cup for the first time. The Cork side disappointed at missing out on the Second Division Junior League title last week will be underdogs going into the tie and if they are up for the challenge could make it difficult for their First Division opponents.

Bruff take on Clanwilliam at Kilballyowen Park in a replay. The sides played a 15-15 draw and the home side will be expected to advance over the newly crowned Division two champions.

Galbally and Kanturk meet in the final of the Junior Clubs Challenge Cup at Charleville. Galbally will start as favourites but can expect a stiff challenge from the North Cork side.

There are six ties to be decided in the Munster Junior Plate. The top game should be the meeting of Thomond and Tralee at Fitzgerald Park.

Both Thurles and Garryowen will fancy their chances of advancing away to Highfield and Sunday’s Well respectively. Ballincollig will be expected to overcome Bandon at Old Chapel..

Kilfeacle should get better of Cobh Pirates and Dolphin should win their replay away to Waterford City.

Abbeyfeale can book their place in the semi finals of the Munster Junior League with a home win over Abbeyfeale.