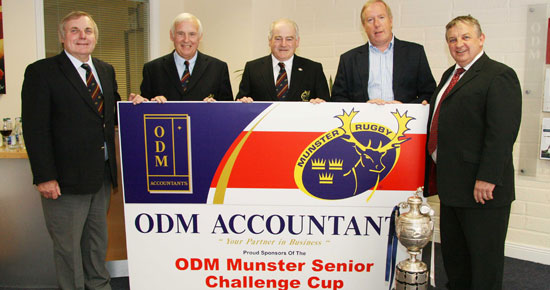 It is Cup action that dominates the weekend’s program with both semi finals of the ODM Munster Senior Cup down for decision as well as several games in the Munster Junior Cup.

The two semi finals of the ODM Cup are scheduled to go ahead on Saturday.
Holders Cork Constitution play Young Munster at Musgrave Park and the Temple Hill side are expected to field a weakened side because of injury and the unavailabilty of other players.

The other semi final sees Shannon take on U.C.C. at Rosbrien. Shannon will be anxious for a win after last week’s big defeat at home to Blackrock College in the AIB All Ireland League and also will be anxious to win back this trophy that they have dominated for so long in the last twenty years.

U.C.C. have been very impressive in recent weeks but look unlikely to gain promotion from Division 1B of the AIL. They will certainly be up for this game and if Shannon do not show a marked improvement an upset is quiet possible.

There are seven games to be decided in the Munster Junior Cup, starting tonight with the meeting of Bruff and Youghal at Kilballyowen Park, kick off 8.00pm. Bruff were very impressive 19-3 winners over Castleisland in the previous round and will be strongly fancied to over come a side that are more concerned with staying in the Second Division.

The big game on Sunday is at the Mardyke when holders U. L. Bohemian travelling to Cork to face U.C.C. With a number of big names already gone from this season’s competition, another one will join them after this tie is completed. On current form the visitors look to be the better side and will be fancied to advance after a tough struggle.

Cashel having lost their chance of a third successive league title will now focus on winning the Munster Junior Cup for the first time. Having already defeated Dolphin they will be confident of beating Shannon on their home patch, although the visitors were very impressive in beating Cobh in the last round and will face a difficult task this time.

Galbally entertain Muskerry and the County Limerick side are on an impressive run at the moment. The sides met in an exciting league tie at Ballyanly last week with Galbally taking the points with a last minute injury time penalty. Muskerry having already seen off Garryowen in the last round will be confident of causing another upset.

There is an all First Division clash at Skibbereen when Clonmel make the long journey. Both sides are disappointed with their league form will be looking for an improved performance and a good run in this competition and home advantage could see Skibbereen advance.

The only Third Round tie outstanding is the meeting of Highfield and Old Christians at Woodleigh Park. Highfield were far from impressive in beating Mallow two weeks ago and on current form Old Christians must be fancied to travel to Crosshaven in the next round.

There are four ties in the Munster Junior Plate. Bandon and Corca Dhuibhne meet in a replay at Old Chapel after playing a 15-15 draw two weeks ago and the home side should advance.

Kanturk will fancy their chances at home to Midleton as should Waterpark who entertain Newcastle West at Ballinakill, while Sunday’s Well should make their trip to Carrick-on-Suir a winning one.

There are also some crucial Junior League ties down for decision. In the First Division Kilfeacle travel to Thurles and a win for either side will ensure First Division survival for another season.

Likewise in the Second Division the two sides at the foot of the table Ennis and St. Mary’s meet at the Clare venue with a defeat for either side probably meaning relegation.

In Division 3A the two sides challenging for the second semi final spot Killarney and Presentation meet at Rathuard with Pres’ needing a win to keep in touch with their opponents.

The other two games in this section sees Abbeyfeale at home to Killorglin and Scariff entertain Kilrush in a Clare derby tie.

In Division 3B both sides sharing top spot face difficult away ties from home, with Charleville travelling to Douglas and Mallow visiting Waterford City.

Fermoy two points behind the top two, will fancy their chances of picking up maximum points with a home win over bottom side Shandon.