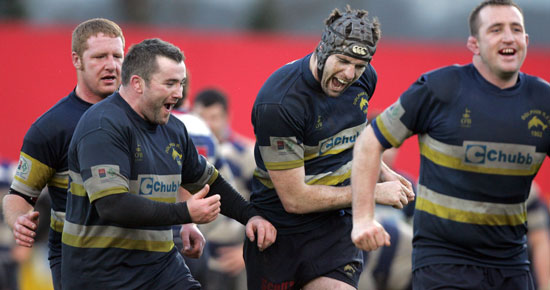 Dolphin and Shannon go head to head on Musgrave Park on Sunday in a game that has a 2.00 kick off to decide the last semi final place in this season’s competition.

Both clubs will see this trophy as their best bet for silverware this season. They have already met in the AIB All Ireland League at the Cork venue with victory going to the home side on an 18-14 scoreline.

Dolphin will be very disappointed by last week’s performance against Garryowen in the AIB All Ireland Cup semi final. They are likely to be without their Munster duo of James Coughlan and Nick Williams, but this gives the likes of George Finn a chance to shine.

Shannon have dominated this competition winning it on twelve occasions in the past twenty years and they will start as favourites to book a place against U.C.C. in the last four.

There are some vital games in the Munster Junior League Division Three. The big game is in Rathuard where second placed Presentation entertain Killarney the side who are in third place a point behind the leaders.

Killarney lost second spot last week by that 19-6 home defeat by leaders Castleisland, while Presentation’s 19-0 away win over Kilrush saw them leap frog the Kerry side.

This is a game that the Limerick side cannot afford to lose and with home advantage may edge it by a narrow margin.

Two sides just behind the main contenders for promotion Corca Dhuibhne and Abbeyfeale meet in a vital game where a defeat will almost certainly end the promotion hopes of the losers. The West Gaeltacht side have adapted well to this league since their elevation this season and they will see this tie as a must win game to stay in the top half of the table.

Killorglin the only side still without a win host Kilrush the side just above them in the table but with a five point advantage. A win would be a big boost to the home side but they will be pushed all the way if they are to come out on top.

There is only one game in Section B and this sees Mallow at home to Douglas, a game that is going ahead on Monday. Mallow can close the gap on leaders Charleville, after picking up bonus point wins in their last two games. Douglas have also show some good form of late but Mallow will be expected to come out on top.
In the Northern Section of the Munster Seconds League Young Munster host Thomond with the visitors looking to keep the pressure on leaders U.L. Bohemian with a victory.

In the Southern Section Highfield travel to Clonakilty as they bid to hold on to a top four finish.

There is also action in the Junior Two League South with five games down for decision as well as some of the usual Christmas friendlies.