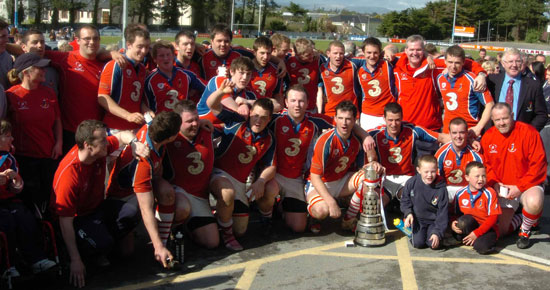 Ul Bohemian retained their Munster Junior Cup title with a 13-6 win over Young Munster at Dooradoyle.

Though they had three players sin binned at various stages UL-Bohemian retained the Munster Junior Cup with a hard earned win over Young Munster who were cheered on by Paul O’Connell who played on the last side to win the trophy in 1999.

A try by Giles Boland from a pass by Ross Butler was the crucial score and it came ten minutes from the end of a game in which the winners were more enterprising.

Both place kickers missed a number of shots at goal before Aidan McNulty broke the deadlock four minutes into first half stoppage time for UL-Bohemian.

Ian Cross leveled for Young Munster before McNulty had another penalty after 67 minutes. A 40 metre strike by Cross had them level again until Boland’s try, converted by McNulty edged it for UL-Bohemian.