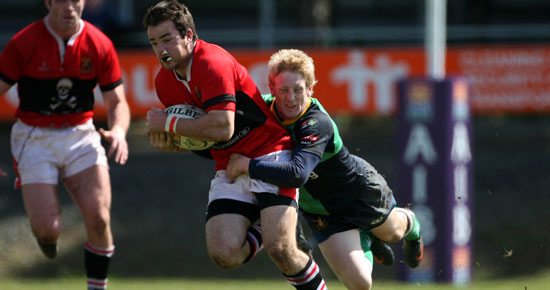 Ballynahinch won their fourth title of the season when they won the AIB All Ireland Division Two League Play Off title to go with the All Ireland Senior Cup along with the Ulster Senior Cup and League trophies with a deserved win over U.C.C at Dooradoyle.

The game began with a flurry of tries with each side scoring two inside the opening quarter of the game. College opened the scoring with a try from Ivan Dineen after five minutes which Gavin Dunne converted, but the Co. Down side were level on thirteen minutes when skipper Johnny Cullen touched down and Ryan Bambry converted.
A forward drive by College saw hooker Wayne Falvey touch down to restore the lead two minutes later. Aaron Ferris had the sides level again with a try and Bambry’s conversion came back off the upright.
A drop goal and two penalties by Dunne put the students 21-12 ahead and a Bambry penalty left the Cork side six points ahead at the break.
It was all Ballynahinch in the second half as they held College scoreless. Neill Hanna closed the gap to a point with a try and Bambry put his side ahead with a penalty.
A fourth try by Nevin Spence on fifty eight minutes made it 28-21 for Ballynahinch and despite a few efforts by College; the Ulster side were in full control for a deserved victory in this their thirty eighth game of the season.