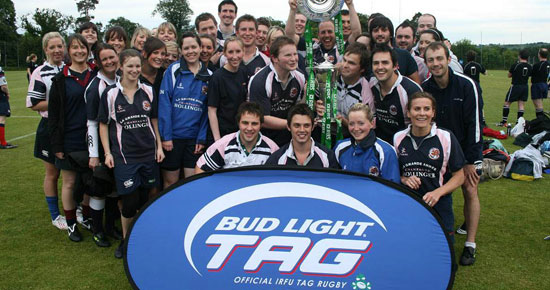 As the Tag rugby season reaches the peak of its summer, in less than two weeks time the Bud Light Tag All-Ireland Open Championships will take place in Garryowen FC on Saturday July 25th.

On the 25th, teams from all over Ireland will descend upon Limerick as they compete for the title of All-Ireland Champions in various grades. The non-contact nature of Tag allows Men and Women of all ages to participate together at a level suitable to their ability and experience, from A Grade through to Beginners and at the All-Ireland Open, all four of these grades are catered for.

This celebration of Tag Rugby, if 2008 is anything to go by, promises to be the ultimate "Game of Two Halves" with the post-match fun being just as important to its participants as the games themselves.

Registration only costs €99 per team and can be performed on the Bud Light Tag website. As this is an Open Championship, all are welcome. Entering a team is not restricted to where a player plays their Tag during the summer or where they end up in their respective leagues.

Deadline for entry is at 4pm on Thursday July 23rd.

8th at Enniscrone in Co.Sligo. This promises to be quite the send-off as a close of season festival so is also just as unmissable an event. As with the All-Ireland, registration available online here and closing date for entry is on Thursday August 6th at 4pm.

Also making an appearance at both these festivals will be the silverware won by the Ireland rugby team in this fantastic Grand Slam and Triple Crown year.

All queries on either of these events may be sent by email to tag@irishrugby.ie

Bud Light Tag is the official IRFU Tag Rugby programme in Ireland and is available to over-18s only.