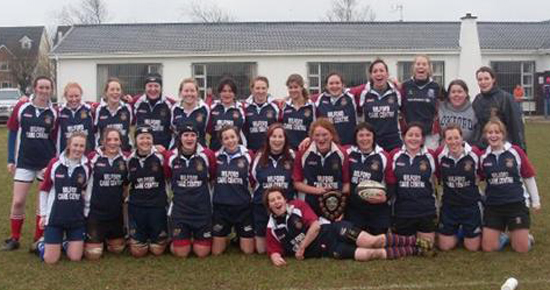 UCC really put this league final to a UL team who have dominated Irish Women’s college rugby for the past year.

After earlier victories of 62 nil over DCU, 22 nil over UCC and 54-5 vs NUIG, UL were favorites to win this match.

UCC opened the scoring after ten minutes of intense play where both tems were hitting hard and creating good go forward ball. UCC’s Geraldine Rea crossed over for a try out wide.

UL built up the phases and applied lots of pressure to the strong UCC defence for the next ten minutes. After a good UL lineout and a well timed backs move Ashling Hutchings scored to the left of the posts. Sarah Jane Coady converted giving UL a 2 point lead moments before half time, with seconds on the clock UCC played one more effort to cross UL’s line but were held up by Ashling Hutchings and Fiona Reidy .

UL entered the second half determined to retain their All Ireland title and fought for every inch for the half. UCC never gave up and after a well worked quick tap and go penalty for UL, Eileen Shanahan crossed over for UL’s second try. UCC continued to fight back and scored a late try out wide through their centre Geraldine Rea once again who also landed a superb conversion to bring the game level on 12-12, and into extra time.

UL’s experience showed in extra time as they kept cool heads and ground out the result. Maria Moran was on the score sheet for UL in the 4th minute of extra time when after great support play she received the ball past the gain line and touched down under the posts. Sarah Jane Coady converted.

In the second half of extra time UL played their best rugby of the game after a good lineout Sarah Jane Coady burst through the UCC defence stepping some defenders before touching down. Coady converted. UCC pressed on and fought back with a last minute try scored out wide by prop Jane O’Raheilly but the consolation try was not enough at such a late stage and the final score was UL 26 – UCC 17.

UL now are looking forward to their upcoming intervarsities which are being hosted in UL on April 7th and 8th. This was UL’s eight All Ireland League title in 12 years while also retaining it from last year. UL now aim to win their 11th Varsity title in twelve years in a few weeks time at the varsities but will have no easy task as they will face UCC one again.

The final of the Irish Colleges Women’s Rugby Division 2 Final held at the impressive recreation facilities at the University of Ulster Jordonstown last Thursday was indeed an historic day for the Institute of Tralee Women’s rugby side where they beat a determined National University of Ireland-Maynooth side.

This was the third occasion that the Tralee girls have reached tthe final stage, having been defeated on the last two occasions.

The first Tralee try was scored by Zoe Dunbar who showed great pace throughout the game, sidestepping her way through the NUI-Maynooth defence on a number of occasions. Scores came in quick succession when Dunbar scored her second try in the 7th minute quickly followed by a try by No 10 Ciara O’Connor.

Anne Marie Murphy had a dream of a try in the 13th minute followed again by Dunbar who scored in the 22nd minute before Murphy wrapped it up in the last minute of the first half leaving the score at 36-0 to the Tralee girls.