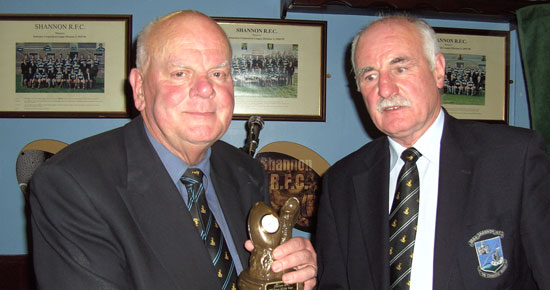 At a club function held in Thomond Park recently, Shannon RFC looked to the past to celebrate and acknowledge the genesis of their latterly achieved status as one of the leading clubs in the country by honouring the men of their first every Munster senior cup win of 1960.

Fifty years have passed since Michael Noel Ryan held aloft the coveted trophy after a thrilling replay against UCC, and its widely accepted within the club that this was year that Shannon took their place amongst the perceived big guns of Munster Rugby and subsequently Irish Rugby.

The nine surviving members of the team were in attendance, whilst those remaining seven players who regrettably passed away were well represented by family members. Shannon’s outgoing President Martin Clancy, himself a member of the team hosted the evening which included a fine recollection of the campaign by captain Michael Noel Ryan as well as a look at Shannon’s 125 year history by Club historian and another member of the 1960’s team Bobby Keane.

The focus of the evening wasn’t just about that famous team. It was also and opportunity to recognise an individual club member for their contribution to the club with the naming of Club person of the year Award. The very popular choice amongst the gathering was a man of a very quiet nature and disposition who was frankly embarrassed by the fuss about him. John Galvin may not be a name on the tip of everyone’s lips, but without him Shannon’s facilities in Coonagh could quite simply not cater for the vast number of players that utilise them.

Since his retirement some years ago from the aviation industry, John spends every morning in Coonagh ensuring the pitches and dressing rooms are ready for the heavy schedule of matches and training. His contribution may well go unnoticed by many, but John Galvin is unquestionably one of the most important men in the club and his accolade is richly deserved.

Perhaps the most emotional and proud events of the evening was the remembrance of one of the Clubs greatest members of all in a very special manner. When Frankie O’Flynn passed away in November 2008 Shannon lost a legend, and the task for the club’s executive was to ensure his memory, and love of Shannon could be captured and kept forever. To mirror the unique and special nature of Frankie, the club commissioned renowned local artist and former Shannon player in his younger days, Jim O’Farrell to paint a portrait of the great man.

Without doubt this unveiling was the highlight of the evening with Frankie’s widow Violet and members of her family in attendance.

Frankie will be best remembered the length and breath of the County and indeed beyond for his singing , and the painting is of Frankie carrying out the duty he so loved , singing The Isle. It’s a moment in time that Jim O’Farrell has exquisitely captured with his wonderful talent and for that, the members of Shannon RFC should be truly grateful.

Speaking of his dear friend and colleague on the 1960’s team President Martin Clancy reemphasised the uniqueness of Frankie and spoke of his pride regarding the fitting way that he will be remembered. He went on to thank Jim O’Farrell for his work in producing the portrait, “there’s absolutely no doubt that Jim has truly captured the sprit of Frankie in this wonderful piece of work “ he said. “ we are extremely grateful to Jim for his time , effort and dedication over the last six months or so, and it must also be stressed that Jim gave of his time freely and most willingly” he added.

In response Mr O’Farrell expressed his delight and what he felt was a privilege to be asked to commit the sentiments of the club to painting.

“I knew Frankie well for a long number of years and to say that to be asked to paint his portrait was an honour would be a mild understatement. He was a gentle man of the highest degree and thankfully he will never be forgotten” he stated.
This is the first time the Shannon RFC has commissioned a painting of any member which in itself is a testament to the esteem that Frankie O’Flynn was held in.

The painting, fittingly titled “Are we right lads”, will be on constant display in the main hall of Shannon’s clubhouse in Thomond Park.