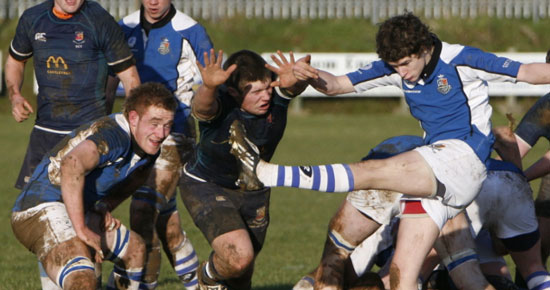 It was a busy afternoon around the province with the quarter finals of the Avonmore Milk Schools Senior Cup taking place and a Junior Cup quarter final game also.

It was a long journey back to Limerick from Crosshaven for the boys of Ard Scoil Ris after a heavy defeat by Presentation College in the opening round of the Avonmore Milk Schools Senior Cup.

Leading 20-6 at the break, three converted tries in the opening stages of the second half ended this game as a contest. To be fair to Ard Scoil Ris they battled on to the finish and after laying siege to the Pres line in the final quarter they were rewarded with a try from substitute prop Kieran Earls.

Out half Jamie Galvin who had a fine game for the Limerick side put them into the lead with a penalty after seven minutes, but Kevin Kidney had the home side level minutes later.

A great back line movement saw Cian Bohane bundled into touch in the corner for Pres. Jack Duffy took the ball from the tail of the line-out to touch down and Kidney converted after twenty minutes.

Galvin kept Ard Scoil Ris in touch with his second penalty minutes later, but tries by Kidney and Bohane put some daylight between the sides at half time.

Pres made a whirlwind start to the second half with tries from Bohane, Paddy O’Connell and Ian Mullarkey all converted by Kidney to make it 41-6. Duffy got in for his second try mid way through the half and Kidney duly converted, before Earls scored for Ard Scoil Ris.

Pres added two further tries by Niall Scannell and Johnny McCarthy and Kidney brought his tally to twenty two with the conversions.

In the other ties the big shock was at Clanwilliam Park, where Glenstal Abbey defeated Crescent Comprehensive 23-16.

Two penalties by Michael Flynn and two by Crescent’s Ben Sargent had the sides level 6-6 at the break. Tries by Daniel Heffernan, and Andy Ryan both converted by Flynn, who also kicked a drop goal made sure of victory for the Murroe school. Aaron Healy replied with a try for Crescent and Sargent added a conversion and penalty.

After an evenly contested first half which ended at 6-6 Glenstal took over in the second period and once Dan Heffernan crashed over for a try following a series of rucks after 42 minutes they took over. A minute into the second half O’Flynn had edged his side in front with a drop goal having kicked two first half penalties and his conversion meant that Crescent had a mountain to climb.

A penalty by Ben Sargent cut the deficit but the issue was put beyond the reach of Crescent when Glenstal had a second try by Andy Ryan which O’Flynn again converted. Aran Healy had a late try for Crescent which Sargent converted from the touchline. Sargent had also kicked two first half penalties for Crescent.

At Musgrave Park, St. Munchin’s defeated C.B.C. 16-8. Graham Mackessy gave Christians the lead with a try, but a penalty by Michael Madden and a try by Craig O’Hanlon had Munchin’s 8-5 ahead at the interval. Two further penalties by Madden made sure of victory for the Corbally College.

Holder’s Castletroy were pushed all the way by a gallant Rockwell side at Clonmel before coming out on top 15-11. Two penalties by Paul McEvoy gave Rockwell a 6-0 half time lead. Darren Moloney got in for a try for the Limerick side a minute into the second half and a second try by Padraig O’Connor which he also converted on fifty one minutes made it 12-6.

A try by John McCarthy and two penalties by David Riordan helped C.B.C to an 11-8 victory over Crescent Comprehensive in the Avonmore Milk Schools Junior Cup at Rosbrien.