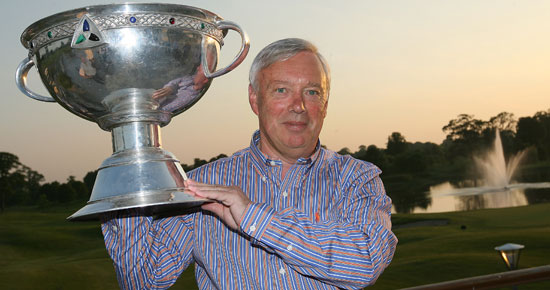 It has been a privilege for me to be President of the Munster Branch IRFU for the season 2008/09. It is a special honour which I will treasure, particularly the people I have met on the way and the friends I have made.

It seems strange, but in some quarters the success of the Munster team has not been greeted with as much support as it should. It is important to set out the achievement made by a new coaching team, Tony McGahan and Laurie Fisher, a new manager in Sean Payne, who has done an excellent job, and physios and management teams.

1. Munster beat the US Eagles on a sweltering hot day in August in Conneticut to win the Setanta Trophy.
2. The "A" team came to within 2 points of beating the All Blacks in a fantastic opening to Thomond Park.
3. They got to the semi final of the Heineken Cup, having produced one of their best performances in years in the quarter final against the Ospreys.
4. An unprecedented 8 of their number were selected for the Lions with Paul O’Connell as captain.
5. They played a major part in Ireland’s first grand slam for 61 years.
6. Lastly, and certainly by no means least, they won the Magners League.

It was great to be involved with the team and to travel with them and see the professional way in which they approached each game, be it in Glasgow on a wet January evening or on a cold November day in Swansea – well done to one and all.

Munster teams had other achievements –
(a) The Women won the interprovincial championship for the third time in a row and produced a strong performance against a very good Leinster team on a very wet and windy Stormont.
(b) The U19 schools only lost to Ulster at Ravenhill, otherwise they would have had a clean sweep.
(c) The A schools had a clean sweep at all levels

On an official front, being junior vice President and then senior vice President does not prepare you for the demands of the year. It might be best to be retired but then of course my partners thought I was, but even with all that I did not have enough time to get to every function nor did I get enough time to meet clubs, particularly junior clubs, and I apologise to all those whose invitations I was unable to fulfill but thank my fellow officers who stepped in when I was unavailable or tried to divide myself in three.

I would like to congratulate the Munster association of referees in the numbers of active referees in the Province and to John Lacey who was promoted to the contracted panel and to George Clancy and Peter Fitzgibbon who have refereed at Magners League and European Challenge Cup level. On the subject of referees it is a difficult job and they do their best and I would particularly request all clubs, coaches and supporters not to abuse – verbally or physically – referees and support them even when they are unhappy with their decisions – as I know myself it is not easy to be a referee and everyone on the touch lines have their own interpretation of the rules.

I have ongoing concerns however on the domestic game side where there has been a loss of players from the high 5,000 to around 3,000, some of this may be due to re-registrations but in particular the major loss of players is at the 18 – 23 age group. I appreciate the strides being made by colleges this year to bring more players into the net by establishing themselves as a club and hopefully those players would be available to teams if their interest in rugby can be continued.

The other area is of course the universities and whilst I understand the wish of universities to retain as many players as possible there is a middle ground where players who are not playing to their level should be encouraged to join clubs rather than drifting away from rugby. I hope this will be looked at in the future.

There are not enough players coming forward to the Munster academy – there may be issues about academy players being available to clubs and I accept that not everybody is happy with the perceived policy but players of high achievement should be encouraged to join the academy or at least play at a good standard.

The future development of Musgrave Park is close to my heart and the facilities are not up to standard. I do hope that despite the recessionary times a development will take place and that Cork will not lose its place on the Munster rugby fixture list, it is an important part of Munster rugby.

There are difficult times going ahead particularly for senior clubs in terms of the cost of travel, coaching, expenses, equipment etc. and last year I drew up a blueprint for an AIL Munster clubs committee, just as the junior clubs have a junior committee, and I believe this should happen rather than relying on the All Ireland Senior Club Rugby Association and if the new Bye-Laws come through then both junior clubs and the senior clubs will be represented properly on the domestic game board.

There are other areas of rugby that clubs should consider such as sevens, formulating a women’s team, more social rugby and/or tag rugby.

The whole area of domestic games in the future of rugby in Munster must be brought forward and to that end I salute and thank all the volunteers whom I have met throughout my year and before, who have been so heavily involved in clubs, committees, coaching, management, grounds – despite sometimes what you may all think, you are deeply appreciated by Munster rugby and the Munster Branch and we need to keep you involved.

Briefly there were a few highlights of my year that I would mention:
1. The visit of the All Blacks to Thomond Park and the opening of Thomond Park. It was spectacular and I would like to thank all involved, especially the management of Thomond Park and the professional staff in the Munster Branch, they were outstanding.
2. The Grand Slam – as one of the perks I was able to travel to all the Grand Slam matches and it was absolutely unique.
3. The visit to Boston last August.
4. The Awards night – which is a fitting tribute to clubs and players.
5. The President’s day – for club presidents.
6. The winning of the Magners League was a great achievement, particularly for the lesser known players in the squad.

Well done to Kenmare RFC on becoming the newest members of Munster rugby.

On a sadder note the tragic death of Shane Geoghegan put a cloud on the early part of the season but the response of the rugby fraternity, especially his own club, Garryowen, as well as the response of the people of Limerick was heartening for all involved.

A final thank you to all my fellow officers, committee members and especially to the long suffering Frank Byford and to Declan Madden, who has worked assiduously as vice-President. Thank you all for your support during the year and to paraphrase some politicians, I hope I did the Branch some service and there is a lot done but a lot more to do.