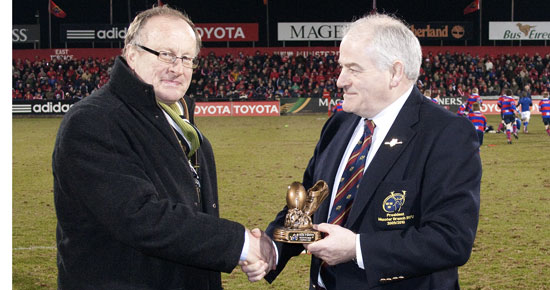 Munster Youths and Cobh RFC’s Nick O’Keeffe has been named winner of the Right Price Tiles Volunteer of the Month for his outstanding contribution to rugby.

Nick O’Keeffe, or ‘Nicko’, as he is more affably known, has a deep association with rugby within the town of Cobh and especially within the framework of provincial youths rugby and club administration. It was probably always destined that Nick would be drawn to rugby, as his late father, Nicholas, was the hooker and Captain of the 1938 Presentation Brothers Cobh Senior XV that won the first and only Schools Cup for the town.

On the courts of Rushbrooke Lawn Tennis Club Nick developed a love for tennis and he achieved considerable recognition in his formative sporting years, when he became the Munster Junior and U/18 Champion. However, his most notable achievement was at national level, where he was also the Irish Close Tennis Champion at U/18.

It was during his time at UCC undertaking a B.C.L. degree, that Nick began to display his rugby skills and he plied away in the local domestic competitions with Cobh Pirates RFC from 1967 onwards. Wearing the No 10 jersey his playing colleagues referred to him as Cobh Pirates’ answer to Ollie Campbell, such was his flair, knowledge and love of the game.

The mid 70’s saw the end of Nick’s playing career due to injury, however his love for rugby continued with the formation of Cobh Pirates Youth Section. He became the club’s Munster Branch Representative, a position he has maintained to this day as well as his other involvement within youth’s rugby.

Cobh Pirates would be indebted to Nick during the latter half of the 80’s and especially the 90’s as the youths section started to produce players of note, in that Nick, would at all times lend his knowledge to the coaches and proactively help players to reach their potential.

There are many players throughout Munster at all representative playing levels, past and present, which would have gone through the Munster Clubs Youth System under Nick’s direction and involvement. For the last twenty years Nick has acted as chauffeur, bag carrier, bottle washer, organ grinder if needed, all this and more in his capacity as Chairman of Selectors for the Munster Youth’s team and formerly as Munster Youth’sTeam Manager.

In all this time Nick has seen a huge development in the game and has been a witness to the growth of Rugby in the non traditional areas. From the early days of Inter Provincial Youths Rugby when games were played and teams picked from a single trial game to today, where players go through a rigorous screening process to identify those of potential, Nick has been part of it all. In fact more than been part of it he has helped to shape the direction of youth rugby in Munster to the success it is today.

There is no greater reward for him than to see those that he helped continue to play the game and some to the highest level. Be it with at club or provincial level, players all over Munster that have been through the youth system will give praise and testament to the great commitment and humanity of this servant to Munster Rugby.

With the great support of his wife Rose and family, Nick has been part of what has made Munster rugby into what it is today. He is part of why Munster has been successful. He is a volunteer who has given his time, wisdom and knowledge to developing the young of this province to teach them what the ethos of playing for Munster means.

Nick may not be a household name but to those involved with Youth Rugby in Munster he is a true great. Munster Rugby would like to pay tribute to Nick’s hard work, dedication and commitment to club and provincial rugby and long may it continue.

Successful nominees who meet the set criteria will be recognised for their efforts by receiving a generous prize package which includes Munster match tickets, our Volunteer Award Trophy and a voucher for the Munster Rugby store.
For full details of eligibility and terms and conditions, please refer to www.munsterrugby.ie or email damonurlich@munsterrugby.ie