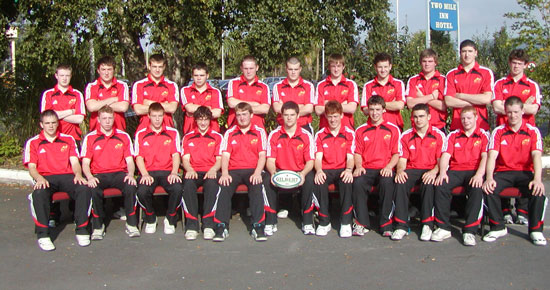 "There are no second chances in this last round of the competition" commented head coach John O Sullivan as Munster Youths take on Ulster in Ravenhill this weekend, Saturday 24th, ko 12.30pm.

Munster beat Leinster in the opening round of the Interprovincial competition in November. Loosing by a score to both Ulster (away) and Connacht at home, John O’Sullivan’s coaching team will want to put the record straight this time round.

"Weather Conditions haven’t exactly been ideal for preparation for the final round, but we’ve worked very hard with the assistance of Steve Forde, Ken O’Connell, Kevin King and Ronan O’Donovan".

Munster Youths will want to be in the final mix the following weekend in Mullingar with Connacht the only side to have beaten all three provinces, and are favourites to beat a very different Leinster side.

John O’Sullivan brings a lot of experience to this side having coached the Irish ladies team for a number of seasons and knows what it takes to be at the top. "We’re not only preparing the Munster Youths to win out the championship but also giving all these players an opportunity to compete for places on the Irish Youth squad".

Chairman of selectors Nick O’Keeffe congratulated Ken O’Connell (Academy Elite Development Officer) who joined the Irish Youths as forwards technical coach. "Ken has a lot of experience having played at the highest level both at Irish level and as a club professional with Munster, Castres and London Irish. Ken will join two other Munster men who have been with the Irish squad the past few seasons, Lenny Browne, Video Analyst and Tom Nyhan, Logistics Manager.

professional players like Paul Warick who gave up his time over Christmas to give out half Johnny Holland some kicking practice and also heaped praise on his selectors who work tirelessly throughout the year to bring players together.

O’Sullivan went on to say "This competition is very important for these young lads and we’re all looking forward to the challenge of heading to Ravenhill".