Munster U19 Women Start Season on a High 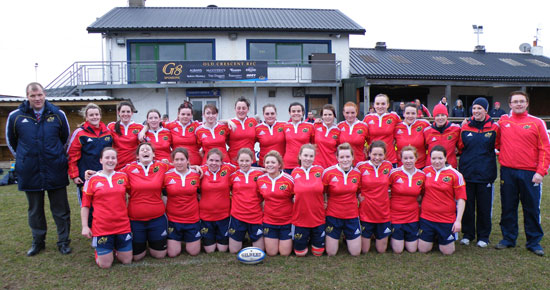 On St. Patrick’s Day the Munster U19 women’s team started their season with an impressive win over touring Canadian side Pocock Pirates at Old Crescent RFC in Limerick.

Munster started tentatively testing out their opposition and new partnerships. Fifteen minutes on and Ballincollig hooker Stephanie Downey hooker brought the play up to the five metre line but an excellent defense from the Pocock Pirates kept Munster out. Munster were not to be kept at bay for long though as an excellent pass to Clonmel’s Dani Delahunty on the left wing resulted in the first try of the afternoon. Not long later Bandon’s Aisling McCarthy made a break and again ran over the line for Munster. Mallow outhalf Leah Downes stepped up on both occasions to convert for Munster narrowly missing the posts.

Play continued on an equal footing for the next twenty minutes with both sides displaying their excellent rugby skills. Just before half time St. Mary’s Claire O’Shea made a dash for the line and with a quick pop to Stephanie Downey secured another try for Munster as Downey deftly ran through the scattered defense. Another admirable attempt from Downes finished the first half of the game with the score line 15-0.

The second half began with the Pocock Pirates coming out fighting with several attempts to break through the Munster defense. Munster however held fast and continued to hold back the Canadian side despite their excellent rucking. A break from Aisling McCarthy resulted in another try for Munster and McCarthy’s second try of the day this was not converted. The next half an hour saw substitutions from both sides and again it took time for the teams to settle.

With only five minutes to go a break through the Pirates defense by substitute Shannon’s Nicole Cronin and a quick pass to Thurles’ Valerie Mitchell resulted in the final try of the day, Downes again just coming up short for the conversion. A succession of rucks from the Canadian side saw off the end of the game with an overall score of Munster 25 to Pocock Pirates’ 0.

The game was an excellent performance for a group of players who in the most part have not played together before and an impressive platform from which to move on from.

Munster would like to thank Old Crescent RFC for hosting the game on the day and the match officials.