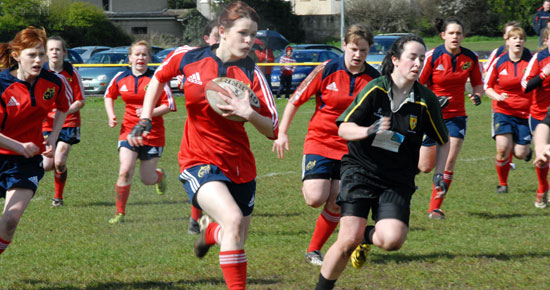 A friendly fixture last Saturday at Young Munster’s Tom Clifford Park in Limerick provided the toughest test yet for the 2009 Munster Under 18 Girls’ side.

County Donegal have been enjoying a serious effort by the IRFU aimed at developing rugby in the county and girls rugby has been given equal billing with boys rugby over the last three years.

The Donegal girls showed all the cohesion and confidence of a team that has played together for a number of seasons and this gave them a substantial advantage over the Munster girls, who struggled to find their form against a much more physical side.

The early exchanges between the sides were very even. Munster won the toss and had the kick-off, which was knocked on by the western visitors. The resultant scrum was a launch pad for a good back row move from Munster but this resulted in an infringement by Donegal in the ruck and out-half Marie Kelly kicked Munster into a great position for a lineout.

A good move by Munster on the blind side of the lineout was turned over by Donegal and they stayed in control for a number of phases that unfortunately resulted in Marie Kelly being replaced by Mollie O’Donnell for an injury to her shoulder.

Donegal pounced on their sudden rush of possession with a well-worked try in the corner in the 32nd minute of play. The conversion was missed and the Munster Under 18 girls were on the wrong end of the score line for the first time this season.

However, within 8 minutes excellent winger Mary Kate Glynn worked a top class reply with a great crash over the Donegal line in the corner to level the sides. The conversion kick was missed and the sides were drawn at 5 all at half time.

The first half was marked by a fine defensive display by Munster, especially by centre Aoife O’Halloran and by forwards Emer Feerick and Sandra Keane.

Munster made a number of changes at half time and the combination of Clare Merrigan at scrum half and Mollie O’Donnell really began to click with replacement centre Rosie Lynch, and breaches started to open up the Donegal defence. Forwards Louise Fitzgerald and Gerda Coyne made great forays and provided solid possession to the back line.

However, it was the western visitors who claimed the first score in the second half with a great try that was run the length of the right hand touch line. The conversion was too difficult and five points separated the sides in an increasingly tense affair.

Referee J. Spencer was excellent in keeping a very physical and competitive game on an even keel and the minutes ticked by with a Munster defeat very much on the cards as Munster made more replacements.

Munster backs Léan McMorrow and Liz Burke added some strong attacking ability, and sustained pressure finally resulted in Rosie Lynch crashing over for an excellent try, with Rosie touching down just on the line over her head.

With the sides drawn, all the pressure was on Mollie O’Donnell for the conversion kick. Mollie showed great composure as she slotted over the kick to put Munster in the lead by two points.

Donegal piled on the pressure and a few errors by Munster let the westerners right up to the home line. Some terrific defence pushed Donegal back to the 22 metre line, when a penalty was conceded by Munster.

The referees declared "last play" and it seemed as though it would all come down to this last kick. Unnervingly, the kick fell two feet short of the cross-bar and the catch was knocked-on. The Donegal scrum led to a frenzied series of phases and only dogged defence by Munster forced Donegal to resort to a drop-kick attempt.

Outstanding scrum-half Clare Merrigan saved the day for Munster with a brilliant block down and the kick fell short and was greeted by the full-time whistle.

A much-relieved Munster side can be very happy with a gritty and committed performance. The fear of losing will have affected much of their play but they will be much better and more composed in preparation for their last game of the season against Connacht in Clanwilliam Park, Tipperary Town on 25th April., kickoff is at 4.00 pm.