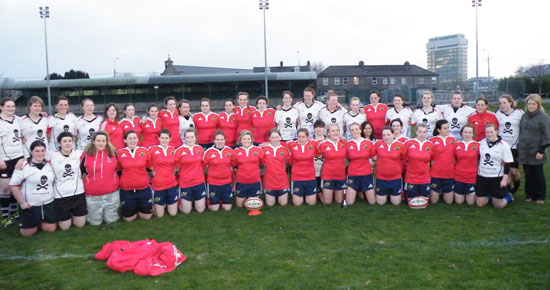 The Carey Memorial Cup took place recently in the Mardyke between UCC and Munster U.19’s.

On a sun soaked evening in Cork Munster U-19’s took to the field against UCC in the Eimear Carey Memorial Cup. Both teams started with intent, concentration and at a very fast pace. Munster U-19s were first to threaten to score maintaining possession and territory for the opening minutes. However the UCC defence managed to hold them out. The opening try of the game came in the first half when No. 8 Valerie Mitchell crashed over the line to get the first score of the game for the U.19s. This was not converted.

Some great passages of play on a night made for wide expansive rugby, with some fantastic individual displays, none, however topped winger Nicole Cronin (Shannon RFC) who’s sideline break was applauded by the crowd. Her lightening pace cut through the UCC defence in the closing minute of the game. Cronin had the talent to not panic on the ball, and timed the offload to fullback Danni Delahunty (Clonmel RFC) who was there in support. Unquestionably a well deserved try with high skill level and smart play.

With the talent that was on display on the night from both teams, there is no question over the potential of Women’s Rugby in Munster this season. The future looks bright.

Eimear passed away in Jan 2008. She played rugby with UCC during her time in the college as she qualified as a doctor. She was living in Manchester with her boyfriend at the time of her unexpected death. Eimear played “anywhere” and “everywhere” for UCC but she really was at her best when she wore the 7 jersey. She epitomised the ideal rugby player – with a high skill level and work rate on the pitch and off the pitch she was very welcoming to new members, always suggesting to organise the Social "bonding" Nights out which always involved plenty of fun!!

Eimear was always smiling – a remarkable individual. Her Saying in life – "Carpe Dieum" – "Seize the day"
The Carey Family Presented the Munster U.19 Captain, Emma Crowther with the Carey Memorial Cup.