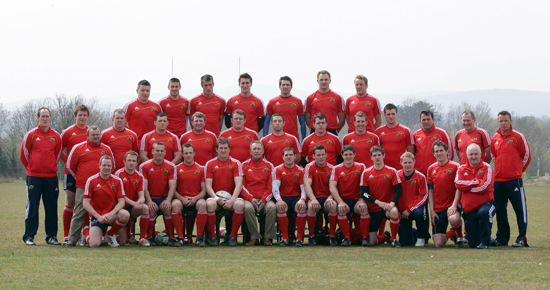 The Munster Junior side began their Interprovincial campaign with a draw away to the defending champions Leinster at a wind swept Seapoint RFC grounds on Saturday last.

Munster Coach Ian Dunne was disappointed with the result as he felt his side should have won this game, but before the game he would have settled for this result and now looks ahead to Saturday’s clash with Ulster at Abbeyfeale.

Playing into the teeth of a strong wind Munster were slow to settle and found themselves 10-0 behind after the opening exchanges when Leinster full back Richard Dunne raced through the Munster defence from sixty metres to score and Gearoid McDonald added a conversion and shortly after slotted over a penalty.

Munster slowly regrouped and excellent work by the pack especially the front row of Thomas Keaveny, David Hogan and Darragh Fitzgerald saw Munster get a foothold in Leinster territory.

Scrum half Michael Hickey got in for a try before half time after several drives by the Munster pack were repelled by the Leinster defence. Peter Murphy converted to leave the score at 10-7.

Munster loked like they had taken the lead before half time when winger David Joyce taught he had touched down in the corner after excellent play by the visitors but this was ruled out by the officials as they ruled he had gone over the dead ball line.

Joyce however did score early in the second half after great work by Keaveny and Joe McSweeney set up the Clonmel man to score.

Winger Barry Gibbons came close to extending Munster’s lead but their only reward was a penalty by Pat O’Connor.

Dunne again proved to be the thorn in the Munster side when following a chip ahead he outpaced the Munster defence to touch down and level the scores.