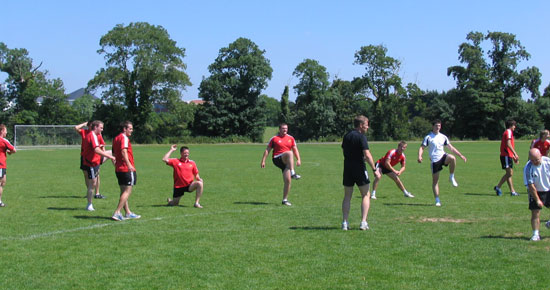 In contrast to the Munster Rugby academy, sub-academy players are not contracted to Munster Rugby and commit their time and energies in an effort to one day make the academy grade.

Players involved in the sub academy are those that predominantly feature on various age-grade representative teams. They include a core group of players that are selected by the Academy and ratified by the Academy Board.

In addition to their club commitments, players attend training sessions throughout the year organised by the academy department. They follow a training programme which includes gym, skill and fitness sessions resourced by the Munster Rugby academy.

There is no set group of players in the sub-academy but numbers vary from 15 to 20 players each season depending on positional requirements and academy demands.

Academy players such as Danny Barnes, Pa O’Regan, Eoghan Grace, Dave Foley and Paul Rowley have come through the sub academy system. Munster’s Tommy O’Donnell who recently secured a senior development contract has moved steadily through the ranks of sub academy and academy.

Some of the current players include Munster’s Irish U20s Ronan O’Mahony, Brian O’Hara, Dave O’Callaghan and Brian Hayes, who were all involved in the Junior World Championships in Japan. Jack Bransfield, David O’Callaghan, Finbar Aherne and Mark Doyle who represented Munster at U20 level last season are also members of the sub academy.

Fermoy Women’s team up and running