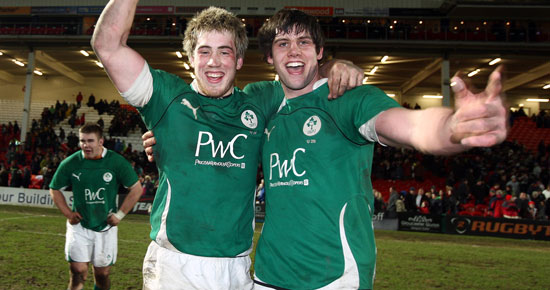 A weekend of mixed fortunes for Munster players representing their country at the weekend.

The Irish representative action was rounded up on Sunday afternoon when the Irish Women’s team suffered defeat at the hands of an impressive England side. Ireland became the first side to score against England in this 6 Nations campaign with Clonmel’s Kate O’Loughlin touching down for a try.

The England Women continue on the quest for a 6 Nations Grandslam after defeating Ireland Women 22-5.

Ireland currently lie in fourth place on the table and with upcoming home ties against Wales and Scotland the side will be looking to improve their position as they finish out the tournament.

A second half resurgence from the Ireland Club side showed great determination and belief, but unfortunately the memorable comeback was not to be, as the side were defeated 29-25 by England Counties.

Despite Ireland’s best efforts in the closing half, the damage was done going in at the break as England held a 23 point advantage.

Next up David O’Mahony’s charges face the Scottish Club side on Friday March 19th in Donnybrook, ko 7pm.

The Ireland U20s move to top of the 6 Nations table after their Friday night win in Kingsholm, where they defeated the England U20s 25 points to 20.

Shannon’s Duncan Casey made his first appearance of the 6 Nations tournament coming on in the final minutes.

The Irish College’s side were at the wrong end of a six try tally as the England Students proved too strong winning 42-9 in Gosford on Friday night.