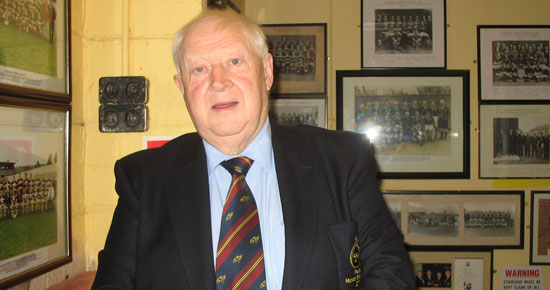 The Annual General Meeting of the Munster Branch was held on June 1st at the Dolphin Club pavilion before a very large attendance.

Out going President Declan Madden in his address gave a detailed report of events over the past twelve months.

Declan Madden proposed former Dolphin scrum half Cyril Fitzgerald as the new President of the Munster Branch for season 2010/2011. He said that Cyril had proved himself an able administrator at club, Branch and IRFU level. This was seconded by Dolphin’s Michael Magner.

In has address Cyril thanked his club Dolphin for bestowing on him the honour to become the tenth person from his club to hold this prestigious office.

He looked forward to continue the good work of his predecessor in implementing the new Branch Bye laws which were passed recently. The other major task in the coming twelve months would be the building of a new stand on the west side of Musgrave Park.

He asked the clubs to support this project and reminded the delegates present that it was their Branch and he wanted his year in office to be the Year of the Club.

Other Business:
Niall O’Driscoll gave details of the new stand to be built in Musgrave Park which he hopes will commence in February 2011 and again appealed for the clubs support for this project.

The other matter raised which caused some debate was the proposed introduction of technical zones on all pitches for the new season.