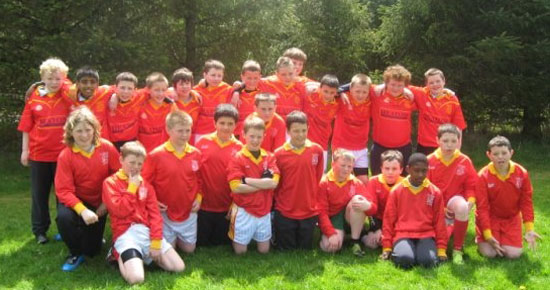 Following on from the success of the 6th class tag rugby blitz two weeks ago, when 238 young players displayed their skills on a bright and sunny day, a 5th class blitz recently took place at Mallow RFC.

It was a massive success with twelve teams of approx 14 players per team took to the school field and had two and a half hours of unbelievable fun.

The combined number of 406 players have had their day of tag rugby over the last two weeks. The usual criteria was for everybody to have fun, good behaviour, sportsmanship and as much skill as you will see anywhere.

The organiser of the event was Community Rugby Officer, Mervyn Shorten who would like to thank the referees from the transition year in the Patrician Academy, Aidan Twomey, Eoghan Barry and Ian McSharry who did a sterling day’s work and continuously refereed for two and a half hours without a complaint.

He also acknowledged the work of his two able assistants who kept the whole day running smoothly, Aisling Glynn from the transition year in St Mary’s Secondary School, who marshalled pitch one and Luke O Brien from Christian Brothers, Cork, who looked after pitch two.

The eventual winners of the fair play award went to Gaelscoil Thomais Daibhis captained by the very talented Rachael Sheehan.

The winner of the match ball on pitch one, as selected by the referee, was Patricia Hayes who is truly a very talented lady and she made every effort to bring as many of her players into every facet of the tag rugby game.

The pitch two winner of the match ball was Laura Willis who scored numerous tries. Laura has great pace and passion for the game, she is a very well balanced runner and has a huge future.

The final winner on pitch three was Barrty O’Donovan who was also happy going home with his match ball.

Thanks to all the teachers and principals for their co operation and presence, it added up to everybody having plenty of fun on a lovely day that was only spoilt slightly by a passing shower.