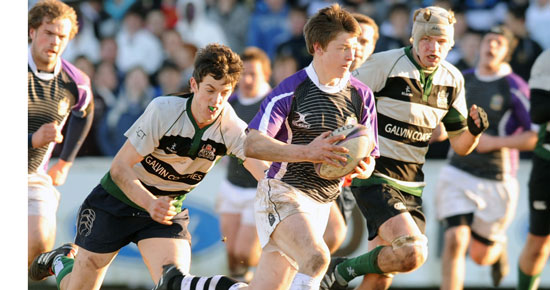 The line up for this season’s Avonmore Milk Schools Senior Cup semi finals was completed with victories for P.B.C., Rockwell and St. Munchin’s.

P.B.C. 27, Bandon Grammar 9.
Bandon Grammar are out of this season’s Avonmore Milk Schools after being defeated by Presentation Brothers College at Temple Hill.
The West Cork School can be very proud of their contribution as they were no way out of their depth when they faced two of the top schools during their five game run.
A penalty by Pres’ out half Sean Og Murphy in the opening minute went wide of the posts, but following the restart the Pres’ pack charged up to the Bandon line and Rob O’Herlihy touched down.
Bandon lost their inspirational skipper James Bendon after five minutes and further disaster struck the West Cork side minutes later when a clearance inside his own Twenty Two by Bandon full back Conor Pullin was gathered by Pres’ winger Ross Caplis and he went in touch down under the posts and Murphy converted for a 12-0 lead.
To their credit Bandon did not drop their heads and began to work their way into to the game with some excellent work by Henry Travers and Sam Hunter. Two penalties by out half Darren Sweetnam and one by Murphy left the Mardyke College 15-6 ahead at the break.
Pres’ dominated the opening stages of the second half and Cathal O’Flaherty broke from a scrum close to the line, but the Bandon defence held firm. Pres did take the lead on forty one minutes when a great break by Murphy set up a gap for Seamus Glynn to cut through and touch down and Murphy added the extras.
However some long kicks by Sweetnam kept Pres’ on the back foot but his side were unable to get into scoring positions and had to rely on a third penalty from Sweetnam to increase their tally. Bandon’s scrum half Jack Robinson began to come into his own with some clever runs and linked up well with his pack, while Pullin also caught the eye with some darting runs out of defence.
Pres’ gained control in the final minutes and after O’Flaherty and David O’Mahony came close to scoring, quick ball out the line saw Caplice go in for his second try but in fairness to Bandon they finished the game deep in the Pres’ Twenty Two in search of a try.
Scorers P.B.C.: Ross Caplice 2 tries, Rob O’Herlihy, Seamus Glynn tries, Sean Og Murphy 2 cons, 1 pen.
Bandon Grammar: Darren Sweetnam 3 pens.
P.B.C.: Pat Deasy; Ross Caplice, Jack Costigan, Seamus Glynn Eoghan Dennehy; Sean Og Murphy, Ronan Barry; Coran Keane, Brian Vaughan, Niall Scannell; Rob O’Herlihy, Dave O’Mahony; Brian Carroll, Jack Duffy, Cathal O’Flaherty.
Replacements: Kieran Ryan for Jack Duffy 42, Killian Kingston for Brian Carroll 54, Eoin O’Shaughnessy for Ronan Barry 64, Brian Scott for Brian Vaughan, Brian Coughlan for Coran Keane both 69.
Bandon Grammar: Conor Pullin; Robbie Skuse, Conor Stallard, William Godsil, Conor Moloney; Darren Sweetnam, Joe Robinson; Sam McElroy, Neill Willoughby, Scot Kingston; Andrew Tanner, David Reynolds; James Bendon (capt), Sam Hunter, Harry Travers.
Replacements: Eanna Tyrell for James Bendon 5, Laurence Pybus for Scott Kingston, Derek Boyd for Conor Moloney both 69.
Referee: Barry O’Connell (MAR).

Munster Rugby would like to thank the following for their help with this article Paul O’Connor, Thomas Duggan, Cian Scott, Art O’Connor, Sean Ryan and Kevin Long.