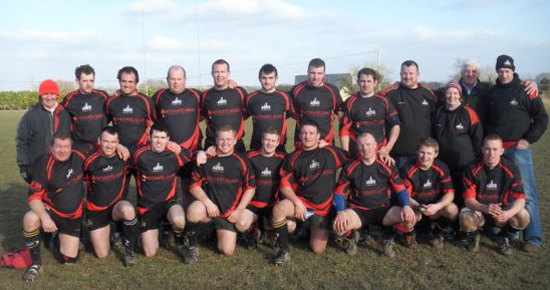 There was plenty of drama and excitement in the latest round of games in the Munster Junior League.

Richmond were crowned Division 1 champions for the second time. Crosshaven were relegated from the top flight, Old Christians are promoted from Division Two and Castleisland are assured of a home semi final in the Third Division play offs.

Both Richmond and Tralee travelled to Cork for their final games in the First Division of the Munster Junior League level on points but the Limerick side held the advantage as a result of winning their earlier encounter.

This meant that a bonus point win would assure Richmond the title, while Tralee had to have a better result than Richmond.

As the drama was unfolding both sides had secured a bonus point in their respective games mid way through the second half of their games. Richmond were leading Ballincollig 35-0 at Tanner Park. Ian Madden scored two tries and Garoid Phelan, Jeff McNamara and Mike O’Friel got one each. Wayne Murphy converted all five tries. Danny Gleeson scored a late try for the home side.

At Skibbereen; Tralee led the home side 12-7 at half time and were 29-7 ahead mid way through the second half, but obviously news reached the Kerry camp of Richmond’s progress, because the home side staged a dramatic comeback to share the spoils 29-29. Joe Costello scored two tries for the visitors and Dermot O’Sullivan, Dan Giles and Kevin O’Shea got one each. Chris Dermody kicked two conversions. Brendan O’Donovan, David Shannon, Sean O’Neill and Declan Coppinger scored tries for the home side and Mark Kingston kicked three conversions and a penalty.

Things were even tighter at the foot of the table as three sides battled it out to avoid joining St. Senan’s in Division Two. Crosshaven started a point behind Thurles and three short of Clonmel’s tally.

Clonmel made sure of safety with a 36-12 away win over Kilfeacle, a side they will face in two weeks time in the final of the Munster Junior Clubs Challenge Cup. Clonmel led 20-0 at half time with tries from John Stokes and Morgan Lyons and two conversions and two penalties by Danny Lyons. David Joyce added a third try for Clonmel and Lyons brought his tally for the day to twenty one points with a third conversion and three penalties. Tom Tierney and Michael Shanahan scored tries for the home side and Shane Luby kicked a conversion.

Thurles masterminded a great come back at Ballinakill to hold on to their First Division status. Three penalties by Brendan Walsh to a drop goal by Ollie Geoghan had Waterpark 9-3 ahead with the game entering the final stages. Geoghan got in for a try for the visitors and Aidan Dwyer converted to secure the points for the Tipperary side.

This meant that both Crosshaven and Thurles finished level on twenty one points. The sides had finished level 8-8 earlier in the season but by virtue of having the most wins Thurles finished ahead of the Cork side and it is the Seasiders who will be joining St. Senan’s in the Second Division unless Richmond go on to secure a place in the All Ireland League next season and than only one side will be relegated.

By virtue of their 34-7 away win over Ennis, Old Christians are assured of First Division rugby next season. Aidan Ware, Gavin Murphy, Paul McGrath, Stuart Lee and Alan O’Dea scored tries for the Rathcooney side and Aidan Tobin kicked three conversions and a penalty.

Newport ensured their Second Division survival with a 13-3 home win over Bandon. Brian Collins and John Kevin Coffey scored tries for the home side and Phillip O’Brien kicked a penalty. Eanna Kelleher replied with a penalty for the visitors.

St. Mary’s moved off the foot of the table with a 14-13 win over Youghal in their relegation clash at the East Cork venue. Barry Gibbons scored all the visitors points with a try and three penalties. Stephen Kelly and Jason Brown scored tries for Youghal and Jonathon Ormond added a penalty.

In a mid table game Kinsale and Kanturk produced twelve tries with Kinsale winning 54-27. The home side led 26-3 at half time. Peter Murphy was their top scorer with three tries and seven conversions. Frazer Hodgson scored two tries and Edouard Brouard-Lemaire, Jeremie Naudinat and Shane O’Halloran got one each.

Castleisland made sure of a home semi final tie in the Third Division play offs after their 35-3 home win over Scariff. William Casey scored two tries and two conversions for the winners. T.J. Casey got a try and a conversion, Shane Flynn a try and Kevin Lyons three penalties were Castleisland’s other scorers.

Killarney moved back into second spot with a 12-6 home win over Presentation. Brian O’Sullivan and George Linehan scored tries for the winners and Sean Hickey kicked a conversion.

Abbeyfeale remain in contention for a promotion place after their 41-0 home win over Corca Dhuibhne.

A last minute try by Micky Griffin converted by Luke O’Shea earned Killorglin a 20-18 away win over Kilrush. Andrew O’Reilly had earlier scored a try for the Kerry side and O’Shea kicked a conversion and two penalties.

Charleville still remain top of section B after their 11-0 home win over Waterford City. Two penalties by Frankie Holly had the home side 6-0 in front at half time and Damian Leahy added a try after the break.

Mallow put a dent on Fermoy’s promotion prospects with a 15-3 home win. Kieran O’Gorman and Ray Roche scored tries for Mallow and Brian Morris kicked a conversion and penalty.

Galbally will be away to Young Munster in the quarter finals of the Munster Junior Cup next week after they won their replay against Muskerry at Ballyanly 13-0. A penalty by Liam Casey had the visitors 3-0 ahead at the break. Tries by Ian Ryan and James Stapleton the latter an intercept secured the Limerick side’s passage to the last eight.

Garryowen defeated Bruff 12-6 to their play off game in the Gleeson league and are now through to the semi finals.

Dolphin booked their place in the semi finals of the Junior Two League with a 32-0 victory in their play off with Skibbereen. Sean Lehane, Tim Cotter, Larry Butler (2) were Dolphins try scorers. Pat Ahern kicked three conversions, a penalty and a drop goal. Dolphin will now be away to Dunmanway and Cobh Pirates will face Tralee in the other semi final.

Cork Constitution booked their place in the final of the Mick Barry cup with a 36-3 home win over Muskerry.

Clonakilty will face Carrigaline in the other semi final after the West Cork side defeated Kanturk 22-5.

Bantry Bay won the George O’Connell Cup after their 47-10 away win over Sunday’s Well and Cobh are through to the semi finals of the Kelly Cup after they defeated Bandon 54-6.

Some promotion issues decided in AIB All Ireland League.