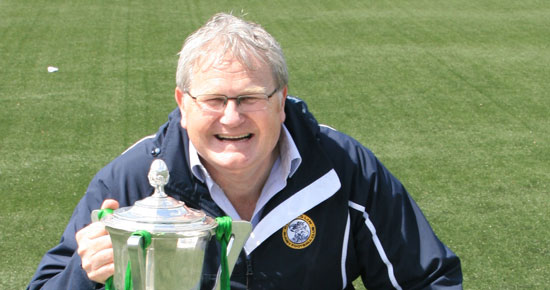 The first Volunteer Recognition Award for the 2009-10 season has been won by John Costello of Killorglin RFC.

John receives our November award on the back of his tireless work for the Club since he became youth officer 6 years ago. In this time he has managed to establish a youth section that now boasts 130 children ranging from the Under 10s through to the Under 19s. According to his fellow Club members John is driven by an enthusiasm to see children enjoying rugby and learning the ethos of the game.
Over the years John has coached Club teams at all underage levels to various Cup and League titles and also helped coach the local Intermediate School senior team who have been very successful over recent years. He has brought many parents into the Club as helpers and some have gone on to complete IRFU Coaching courses and now coach within the Club. John played a major role in helping Killorglin win the "Munster Youth Club of the Year" award in 2008.
Off the pitch John has been the main driving force in the successful implementation of the Code of Ethics and Health and Safety polices within Killorglin RFC. He also represents Killorglin at West Munster Youth Committee level and makes an important contribution to the smooth running of affairs there and also with the West Munster Youth Teams.
On a personal note all his voluntary work for the Club takes up an enormous amount of time and he is fortunate to have great back up at home in his wife Bernie and daughter Niamh. His son Shane has come though the Club underage sections under John’s watchful eye and is now a valuable member of the Killorglin 1st XV squad.
Club president Tom Curtayne in paying tribute to John states that "The work done by John over the years for Killorglin RFC has been tremendous and the Club have no hesitation in nominating him for this richly deserved award". Munster Rugby is proud to acknowledge John Costello as an outstanding servant to rugby in the province

John is the first winner of this seasons Right Price Tiles Volunteer Recognition Programme which was launched to give clubs and schools the opportunity to acknowledge the significant contribution made by individuals and groups who have developed, promoted and/or advanced the sport of Rugby in the local community and in the province. Through the Volunteer Recognition Programme, Munster Rugby would like to acknowledge and reward these individuals who devote countless hours’ week in week out, year after year to provide a safe and enjoyable environment at the grassroots of the game.