Interprovincial Win For Munster U18 Girls 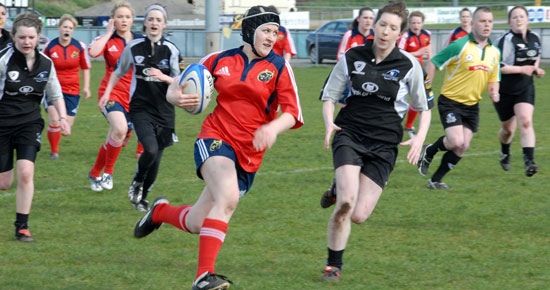 The Munster Under 18 Girls built on their recent win over a touring Canadian side with an interprovincial success against Connacht last Saturday in the Buccaneers’ Athlone home, Dubarry Park.

The match began with a poignant moment when a minute’s silence was observed in memory of Mark Andrews of the IRFU, who sadly passed away during the week. Mark was one of the more central figures in establishing women’s rugby in Ireland over the last decade and his contribution and friendship will be sorely missed by all involved with the female side of the game in Munster and in Ireland. Most of the young players in Athlone last Saturday only learnt then of the extent to which their enjoyment of the game of rugby was due to Mark’s sterling efforts. May he rest in peace.

One of the more impressive developments in girls’ rugby in Ireland this season is the arrival of this new Under 18 Connacht side. It was only Munster’s greater three-year experience at representative level that proved conclusive in this historic encounter.

Connacht showed their intentions early on and dominated the collisions with some intense rucking. However, Munster showed greater patience and structure and took their chances when they arose.

First to score for the visitors was Léan McMorrow, who beat a number of defenders to score in the corner. Her partner in the centre soon added a brace of tries, showing some top class evasion and strength in breaking tackles on the way to the Connacht line.

Mollie O’Donnell supplied the extra points to Rosie’s second try with a great kick from the left hand touch line. Munster Captain Louise Fitzgerald had to be replaced due to an injury and Emer Feerick was introduced to the game and put on a great display.

Vice Captain Rosie Lynch stepped up into the captaincy role and led the team and the play with some great work in defence and attack. Prop Lisa Anglim was a worthy addition to the score sheet when she crashed over the Connacht line after some excellent tight rucking play by the Munster forwards. Mollie O’Donnell again kicked the conversion.

Flying winger Liz Burke scored two successive tries but her second one stood out as she gave a great pass to impressive full back Megan McCarthy. Megan was tackled and popped a pass from the ground to Liz, who looped around her and crashed over in the corner. The half time score stood at 36-0 to the southern visitors but this was very flattering due to the excellent defence put up by Connacht.

Munster had the wind advantage in the second half and newly introduced replacement out-half Marie Kelly kicked very well for field position. A much more controlled game plan was adopted by Munster and their pack dominated the forward exchanges. Some excellent pick-and-go rucking resulted in a fine try from stand-in captain Sandra Keane.

Within five minutes excellent second row Danielle O’Riordan picked the ball from a ruck and crashed over the Connacht line for the third forward try of the day. The rucking of the Munster girls began to almost guarantee possession and territory gains and blind side wing forward Aoife Aherne cashed in some excellent forward work with a try under the home posts. Marie Kelly popped the conversion kick over for the extra points.

Although the scores would suggest that Munster had it easy, the Connacht girls grew in stature throughout the game and it was their lack of structure in attack, more than their defence that contributed to the difference between the sides. They tackled like heroines and their reward came with a fine try 15 minutes into the second half.

Munster decided to keep matters close again and Danielle O’Riordan soon finished off some great forward play with a try that was converted by Marie Kelly. Superb forward Emer Feerick was rewarded for a fine performance when she found herself on the end of a very selfless pass from Paula O’Halloran and crossed the Connacht line for a try.

A fitting sequel to that try came within minutes when Paula O’Halloran’s team spirit and great all-round performance resulted in her dotting down the ball over the Connacht line for the final score of the day.
Munster will be happy that 25 players were used in the match and there was little to tell the difference between the starting players and the replacements.

Munster left Athlone with a real appreciation of the progress that has been made by the Connacht squad in a matter of months of preparation. The return fixture takes place in Clanwilliam Park in Tipperary town on Saturday 25th April at 4pm. This will be a much closer encounter.

Between now and then the Munster girls next outing is against a County Donegal selection in Young Munster RFC on Good Friday, 10th April.