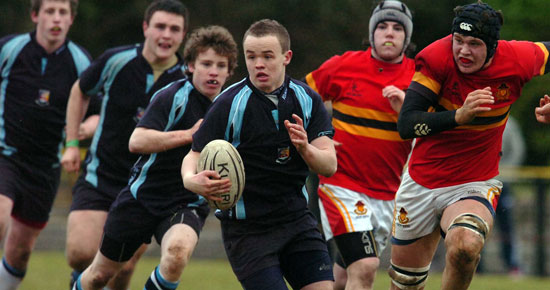 Holders C.B.C. are out of this season’s Avonmore Milk Schools Senior Cup after they lost to Castletroy College in a dramatic finish at Clifford Park.

Castletroy College 14, C.B.C. 11;
This contest came to life in the final ten minutes which saw both sides score a try and Castroy nicked victory with a dramatic drop goal.

In a gripping first half Castletroy went ahead with a penalty by full back Padraig O’Connor after seventeen minutes. Christians tied up the scores ten minutes later with a penalty from Sean Glynn.

O’Connor and Darragh McNamara exchanged penalties early in the second half.

In a dramatic finish Castletroy went ahead five minutes before the end of normal time with an excellent worked try which saw center Stephen O’Carroll touch down in the corner for an 11-6 lead.

A minute into injury time Darragh McNamara leveled with a try for Christians but a drop goal by Peter Murray two minutes later booked Castletroy their place in the semi final where they await the winners of the Rockwell v Ard Scoil Ris tie.