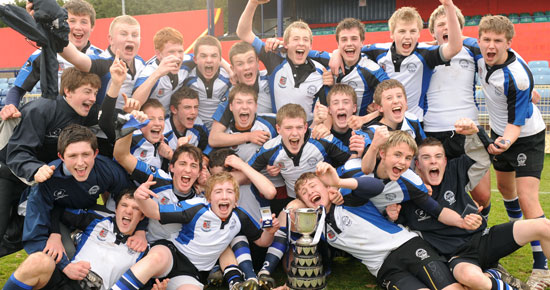 With Crescent attacking from the kick off the CBC defence held firm and forced a penalty for an infringement over the top after six minutes but scrumhalf Ryan Foley failed to hit the target.

Eleven minutes in and number 8 Pat Leahy made a great break from inside his 22 which led to a run of CBC possession, and after a series of pick and go’s outhalf Sean Quill went himself to touch down for the opening score, 5 nil to Christians.

An unfazed Crescent aggressively attacked the breakdown turning over possession at critical times and after 20 minutes they began to build the phases off their own scrum and eventually broke the CBC defence.

A great run and offload from centre David Culhane to number 7 Diarmuid Dee led to fullback Greg O’Shea going over the line for Crescent’s opening score. Dee followed up with the conversion to put the visitors ahead 7-5.

In the following minutes CBC deemed to be offside from the lineout and Dee duely converted the penalty in front of the posts to give his side a 5 point lead going into the final minutes of the first half.

CBC continued to press on with fullback Cillian Monaghan making a break down the right wing, but CCC’s defence held strong as they sustained the pressure until halftime.

On the resumption CBC were awarded a penalty and Ryan Foley found his target to bring the Cork side back within 2 points, 8-10.

Both sides lifted the intensity for the final 30 and there was some great displays of running rugby with both teams attacking at every opportunity.

After 20 minutes of high tempo play Crescent outhalf Gearoid Lyons set off on a looping attack to eventually find O’Shea making an impressive solo run down the left wing, breaking the CBC defence and cutting back inside under the posts for his second try of the afternoon. He followed up with the coversion to pull away from CBC 17-8.

The home side regrouped and started the counter attack by keeping the ball in tight and they worked their way inside the Crescent 22, as the pack drove on they were rewarded with a Pat Leahy try in the closing minutes.

This was to be the final score of the game as Crescent held on to their four point lead, and were awarded the Avonmore Schools Junior Cup after a ninteen year gap, defeating Christians 17-13.