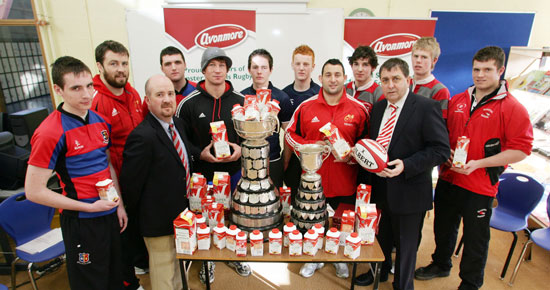 Munster Senior players were on hand today to launch The Avonmore Milk Centenary Munster Senior Schools Cup for 2009 at Castletroy College Limerick, current holders of both the Senior and Junior Cup titles.

Also launched were the Avonmore Milk Munster Junior and Munster Youths Cup for 2009. In 1909 CBC won the very first Munster Schools Senior Cup, and they along with Presentation College Cork, now lead the role of honour with 27 titles with Rockwell College with 23 titles.

Speaking on behalf of the sponsors, Kieran O’Connor, Glanbia Sponsorship Manager said, "Glanbia are delighted to continue our association with Munster Rugby who have been fantastic ambassadors, not alone for Rugby in Ireland, but for all Irish sport. As a pure food company, with a wide range of dairy and nutritional products, we believe our involvement with both schools and youth’s rugby in the province is an ideal mix in promoting a healthy lifestyle for our youth through sport and healthy diet. The association of our Avonmore Milk brand with Munster Schools and Youths has been very successful over the past four seasons and we are eagerly looking forward to the 2009 Schools / Youths Cup Campaigns and our continued sponsorship of the Munster Youths and Schools Teams".

Speaking at the launch, Jim Riordan, Honorary Treasurer Munster Branch said, "Munster Rugby are delighted once again to welcome Avonmore Milk as sponsors of two of the most important areas for the development of Munster Rugby namely Schools and Youths Rugby. The Senior and Junior Schools Cup sponsorship which we launch today is vital in maintaining the tradition and profile of these great Cup Competitions in Munster.

The Munster Schools Senior and Junior Cups remain the most prestigious competitions in schools rugby in Munster, and never fail to catch the imagination of rugby fans all over the province, with the involvement of old rivalries and new squads creating exciting opportunities to see the rugby stars of the future in action".

Speaking on behalf of Munster Schools, Greg Ashe said, "The Avonmore Milk Munster Schools Senior Cup competition remains the premier age grade competition in Munster and the highlight of the schools rugby calendar. The battle to capture this title remains as hard fought, as it was when the competition started in 1909. Last year was an historic year for Schools Rugby in Munster with Castletroy capturing both Senior and Junior Cups for the very first time.

The Avonmore Milk Munster Schools Junior Cup U15 competition continues to be the breeding ground for Munster’s young talent. As per recent years, the last eight schools in the competition will have at least two matches in three rounds of quarter finals, rather than a straight knock out ".

This year Avonmore Super milk will also be sponsoring a Supermilk Super Hero – Man of the Match Award, for not just the Senior Schools Cup Final (won last year by Castletroy’s Dermuid McCarthy) but for the Schools Semi Finals and Youths Cup final as well . The winners will receive a Munster Rugby Store voucher along with a special Super Hero trophy. Also, as in previous seasons, the Avonmore Milk Fair Play and Performance Awards will be presented to the Schools who the judges select for playing rugby in a fair, competitive and sporting manner. Along with their Award the winning school will also receive a Sports Equipment Voucher.