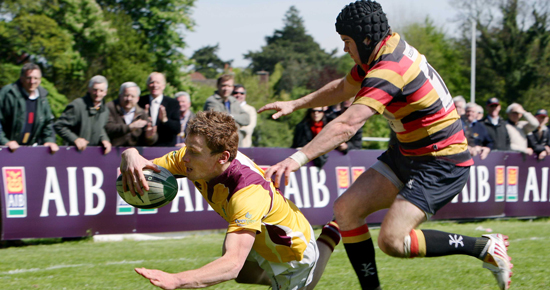 The season draws to a close for Bruff RFC after their AIL Division 2 defeat to Lansdowne at the weekend, but the Limerick side are looking forward to Division 1 rugby next season.

Well what a closing week of the season for Bruff.

With the midweek game between Bruff and UL Bohemians U15 squads kicking off rugby for the final week, a dominant Bruff side proved far too strong for their opposition on the night and they ran out eventual winners on the night 29 points to 7.

Tries by Darren Cosgrave, Shane Doona, Darragh Glynn, Eamonn Costelloe, Cillian Rea, Conversions by Graham Whelan. This gives this team the Cup and League double for the second year in succession. Congrats to Liam Doherty, Tommy O’ Dwyer, Ger McNamara, Stephen Foster, Brendan Deady and all of the guys who helped out with the team this year.

Saturday saw the final game of the season take place in Anglesea Road. We watched Nenagh Ormond come within a whisker of taking the Division 3 Title, Despite dominating the game, they seemed to be out on their feet at the end and a try in the final minute cost them the title.

I thought that the Division 3 game was played at an incredibly fast pace until our own final kicked off. This turned out to be one absolute cracker of a game, for neutral fans it was probably the game of the season and befitting a final playoff. When Lansdowne touched down after five minutes courtesy of a try by the winger Matt Healy which Andrew Geraghty duly converted to give them an early Seven point lead, all but the Bruff fateful wondered whether this game would be a repeat of the match early last October.

Massive pressure from Bruff on the Lansdowne pack up front, coupled with some beautiful mazy running from all over the park by the backline gave Bruff a great edge from then on, the stiff breeze not helping Bruff captain and out-half Brian Cahill with two penalty opportunities but the Lansdowne defence stood firm until a sliced clearance on twenty two minutes, John Moore charging down the Lansdowne Winger Gahan just in front of his own line creating the slice which gave Moore a sweet opportunist touchdown in the corner to close the gap to two points.

Bruff seemed to dominate proceedings up front but couldn’t break the line. Both defences took charge for the remaining period until just on halftime, a crazily crooked lineout led to the Lansdowne full-back cutting in for try number two which Geraghty again converted to give them a 14-5 halftime lead.

Bruff seemed to come out from the halftime huddle with even more vigour and fire and the pack took proceedings by the scruff of the neck, Bruff absolutely dominating the scrums and tight exchanges but even though they seemed to do what they liked with the Lansdowne pack at scrum-time, a penalty for Lansdowne twelve minutes in stretched the lead to twelve points.

Bruff seemed to shrug this off and start again and after another seven minutes they reaped their reward with what was probably the best score of the game with nearly the whole team combining to put Pat Thompson clear in the corner following a sweet final run-in. Cahill failed with the awkward conversion attempt, 17 -10 and twenty minutes on the clock.

At this stage everyone felt that Bruff could just shade it but time and time again the Lansdowne defence stood firm and the referees whistle gave them relief at vital moments, even though Bruff never gave up right until the final whistle.

I have to add that Bruff definitely warranted their second place in Division two this year and proved this to everyone on Saturday. As I stated at the start, this game was played throughout at a frightening pace from start to finish and if they can hold things tight right from the start of next season, I can see both of these teams doing very well in Division 1b.

The next poker classic is being fixed for the night of Friday the 14th May. Same rules as the last night, we hope to get a good crowd out for this.

The AGM has been changed to Wed 26th May. Notices of motion and nominations to the Hon. Sec. By Wednesday 19th.

Finally, to everyone involved in the club from Adult rugby all the way down to Under 10’s, I want to take this opportunity to thank you from the bottom of my heart for one fantastic season at every level and while we are all looking forward to a break from things for a couple of months, I think that we relish the challenges that lie ahead in Division 1 at senior level.