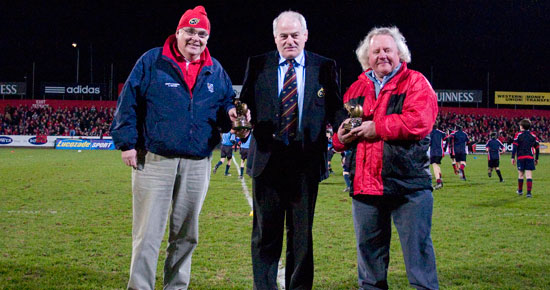 This month’s award goes to two men who have contributed hugely to the development of rugby in Bantry; Richie Reynolds and Neill Clarke.

Bantry Bay RFC was formed in 1926 and in the 1930s they won the Cork County Cup three times. The Club ceased to operate in 1941 due to petrol shortages and then played for a single season in 1951. Due to the efforts of local people including Neill Clarke and Richie Reynolds Bantry Bay RFC reformed in 1992. Both Richie and Neill have been ever constants since then, Richie as treasurer and Neill as secretary.

They have both been actively involved in fund-raising which included youth discos in the Boys Club, Carol Singing at Christmas and an up and running 100 Club draw which is currently the Club’s main fund-raiser. This helps to provide gear and equipment etc to the ever expanding Club membership.

Last year Richie and Neill were involved in organising the Club’s First Annual Dinner Dance which was a huge success, with guest speakers George Hook and Brent Pope in attendance. A great night was had by all in what was another successful fund-raiser for the Club. This year’s dinner dance was held recently and was another great success.

A typical week would see Neill and Richie juggle fund-raising initiatives, allocate international and Munster tickets, attend branch meetings and junior games as well as arranging fixtures and assisting with preparation of the pitch for games. Both men are innovative and endeavour to facilitate the expansion of the Club whenever possible. They have seen the Club survive through the lean years but can now feel proud of their efforts with the Club currently fielding more than 200 youth members, over 30 junior players and girls’ schools rugby now beginning to blossom. The highlight so far came at the end of the 2007/2008 season when the underage section won the Munster Mini section Club of the year award. This was a huge achievement for such a small club.

Neill and Richie have both contributed greatly to the spirit and development of rugby in Bantry and surrounding communities and are both worthy recipients of our Volunteer Recognition Award. It is also fitting that their attendance at this evenings match coincides with the Bantry Bay Under 10’s playing in the half time match.

PRIZES:
Successful nominees who meet the set criteria will be recognised for their efforts by receiving a generous prize package which includes Munster match tickets, our Volunteer Award Trophy and a voucher for the Munster Rugby store.
For full details of eligibility and terms and conditions, please refer to www.munsterrugby.ie or email damonurlich@munsterrugby.ie