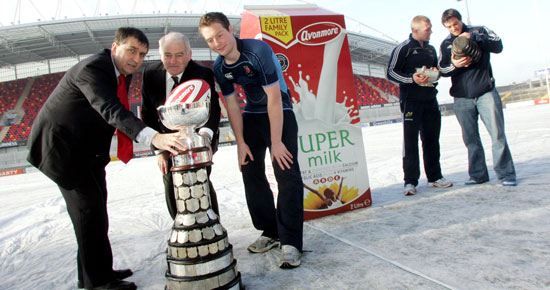 Speaking on behalf of the sponsors, Kieran O’Connor, Avonmore Sponsorship Manager said, "Avonmore are delighted to continue our association with Munster Rugby who have been fantastic ambassadors, not alone for Rugby in Ireland, but for all Irish sport." He added that "it is great to see so many former Schools players of recent years now representing Munster including Tomas O Leary CBC, Keith Earls St Munchins, Paul O’Connell Ard Scoil Ris, Ronan O’Gara PBC, Denis Leamy Rockwell and David Wallace Crescent College Compreehnsive to name but a few".

Also in attendance were Declan Madden, President, Munster Rugby and Greg Ashe, Munster Schools Secretary who stated he was "looking forward to the upcoming battle to capture this Avonmore Senior Cup title which remains as hard fought as it first was when the competition started 101 years ago which was won by CBC, Cork".

The finalists in this season’s competition will be competing to become the first school to put their name on a new trophy which has been presented by the CEO Munster Rugby,Garrett Fitzgerald.

As in previous years, the last eight schools in both Avonmore Milk Senior and Junior Cup competitions will be guaranteed two matches. The winners of Round 1 will secure "home" advantage in Round 2 against the losers in Round 1.