Another Successful Year for the North Munster Development Squad 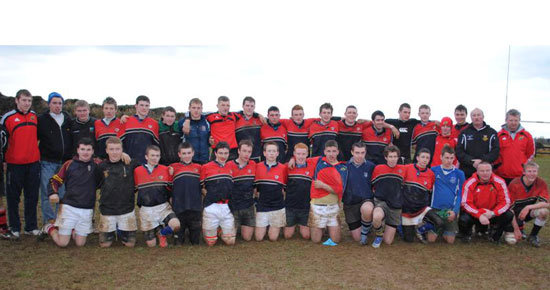 In May of last year the North Squad and the selectors viewed almost 100 players before a training squad of thirty-two was established.

The squad was made up of players representing clubs from across the region – Scarriff, Newcastle West, Bruff, Ennis, Thomond, Young Munster, Kilrush, Charleville, U.L. Bohs, Shannon and Garryowen.

The squad and coaching staff put a lot of effort into skills, player development and conditioning throughout the training period where the training programme is based on the Munster Youth Model.

The round robin games that were played in early March against the development squads from East, West and South were of a high standard. The type of running game that was played by the North Squad proved to be very entertaining and the strike rate of ten tries in three games was very rewarding for players and management alike. At the end of the series of games North Munster were again champions.

The squad management and coaches would like to thank U.L. Bohemians Garryowen and Young Munster for the use of their facilities. A great deal of credit must go to these young men and their parents for the time and hard work they have put into this.