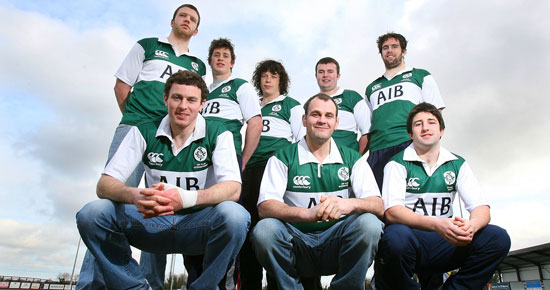 The Munster clubs are well represented in the AIB Club International Side with eight players involved in the match 22. Ireland Club XV take on an England Counties XV on Friday night in Donnybrook, ko 5pm.

The side is once again headed up by Cork Constitution Coach Brian Walsh and he is joined by fellow Munster men, UCC’s Brian Hyland and Shannon’s Donal Brennan as Manager.

The side has a fresh look with six players returning to the club side that beat Scotland last year on a 20-15 scoreline.

Ruairi Cushion (Old Belvedere) and Barry Keeshan (Dolphin) renew their half back partnership while Cork Con flyer Cronan Healy is also named in the back line.

Up front Highfield’s Martin Gately and Alan Maher of Lansdowne are also back from last season. Hugh Hogan of St. Mary’s College, who featured against Scotland last year, has been named Captain.

Newcomer, Dolphin’s Barry O’Mahony, starts in the backrow as he joins younger brother Ronan in representing his country this year. Munster Rugby sub-academy player Ronan O’Mahony is currently involved with the Irish U20’s side and scored Ireland’s winning try against Italy last week.

Commenting on the game, Walsh said "We have introduced a number of new faces to this year’s squad and hopefully that will bring the same sort of enthusiasm and the same results that we had last year and in previous years. The lads have done very well in the sessions that we have had, so we hope that we will be in for another entertaining match, particularly after last year’s fantastic spectacle against Scotland."

"The opportunity to represent Irish rugby at any level is an honour and something that many of the AIB League club players may never have had the chance do again, so the Club International is really becoming an objective for many of the players in the AIB League."

"We want to enjoy the match, as any fixture against our old rivals England is always a great occasion, but we also want to win the game and show the high level of commitment and talent that the club game has to offer."