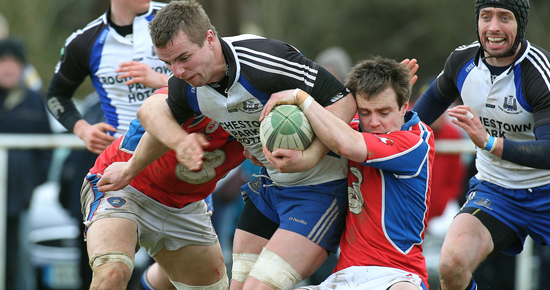 Cork Constitution secured a home semi final place in the Division 1 play offs as Bruff gained promotion to the First Division and Highfield are relegated to the Third Division after Old Crescent stun champions Lansdowne at Rosbrien.

Six years ago Bruff were crowned Munster Junior league winners and AIB All Ireland Round Robin champions and now they will be playing in the First Division next season after they defeated Malone 28-27 in an exciting tie at Kilballyowen Park to gain promotion from Division 2.
Skipper Brian Cahill slotted over an injury time penalty to give the County Limerick side victory in front of a very enthusiastic home support.
Eight minutes from time the sides were level 20-20 and a try by Mark Hill converted by Josh Pentland put the visitors seven points ahead. Gearoid Ryan reduced the deficit with a try four minutes from time but Cahill missed the conversion to level, but he made sure of victory with his third successful penalty attempt.
The sides had been level four times through out the game with Cahill contributing eighteen of his side’s tally with a try, three penalties and two conversions. Peter Malone was their other try scorer.

There was also great excitement at Rosbrien where Old Crescent staved off relegation to the Third Division with a 14-12 win over Lansdowne. A victory that ended the last unbeaten winning streak in the AIB League.
James Cullinane scored a try for the Limerick side and Brian O’Shea kicked three penalties.
This result means that Highfield will be joining Greystones in the Third Division next season.