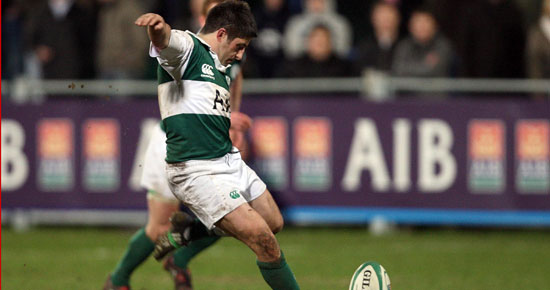 An injury time drop goal by skipper Barry Keeshan earned Dolphin a dramatic 13-12 win over Cork Constitution in Division 1A at Musgrave Park.

Constitution got off to a great start with a try from Tom Gleeson which Richard Lane converted. The visitors will look back at their missed penalty opportunities.
Keeshan opened Dolphin’s account with a penalty and the home side went ahead minutes before half time when James Coughlan got over for a try but referee Alan Lewis opted to award a penalty try and Keeshan converted for a 10-7 half time lead.
Con’ were back in front two minutes after the restart when Frank Cogan pounced on a mix up in the Dolphin defence for a try.
It looked like that the visitors would hold out for the points until Keeshan’s thirty five meter kick in injury time.

UL Bohemian made a disappointing start to their campaign when beaten 8-3 by Blackrock at Thomond Park.
The hone side was on top in the forward exchanges in the first half but could not penetrate a solid ‘Rock defence. All that UL Bohemian had to show for their dominance was a penalty by Edwin Torrie.
Blackrock started the second half in livelier manner and launched a series of rucks and mauls. Ultimately it paid off when Andrew Conway got in for a try and a penalty by John Power ensured victory for the Dublin side.

St. Mary’s College are top of the table after the first series of games after they collected maximum points at Templeville Road with a 24-7 victory over Clontarf.

In Section 1B, it is Old Belvedere who top the table with maximum points after their 24-3 home win over newly promoted U.C.C. It was tries either side of half time by John Kennedy and David Mongan that killed off the students challenge. Andrew Burke kicked a penalty in the opening half for the students.

Buccaneers threatened to spoil the party at Clifford Park when Adam Kennedy put them in front early on with a penalty.
Alan Kingsley levelled with a Young Munster penalty and he put them ahead with another fine strike.
Kingsley then capped a great first half performance when he went in for a try which he also converted to have the home side in front 13-3 at the interval.
Aaron Carroll had a second try for Young Munster who wrapped up the points with another try by Clem Casey.
Try as they might Young Munster could not manage a bonus try despite intense pressure.

In the other two ties in this section there were victories for Ballymena over Ballynahinch and Galwegians defeated Dungannon both on a 15-13 scoreline.

In Division 2 six sides got maximum points with Lansdowne topping the table after their 42-9 away win over newly promoted Old Wesley.

Bruff are in second place after their 40-8 win over Highfield at Woodleigh Park. Gary Leonard, John Shine, Dave Horan, Nigel Riordan and John Moore all scored tries for the Limerick side who were also awarded a penalty try. Brian Carroll kicked two penalties and two conversions. Mike Bayssat replied with a try for the home side and Colin Mahoney kicked a conversion and two penalties.

Thomond got their campaign off to a great start with maximum points from their home encounter against Greystones on a 34-6 scoreline.
Declan Cusack scored a try for the winners and also kicked a drop goal and four conversions. Jamie English scored a try and drop goal and Warren Kelly and Darren Clancy got a try each. Lynn replied with two penalties for the Wicklow side.

There was no joy for the other two Munster sides in this division. Old Crescent lost 31-16 away to Belfast Harlequins. Philip Glamuzina and Mark Woods scored tries for visitors and Woods added two penalties.

Clonakilty were defeated 38-14 by DLSP at Kirwin Park. Darragh Lynch and Noel O’Sullivan scored tries for the West Cork side and Kurt Morath converted both.

All three Munster sides in the Third Division recorded victories with Nenagh Ormond going top after their 44-13 home win over Connemara. David Delaney contributed a try, three conversions and two penalties of his side’s total while Darren Gallagher, Colm McMahon, David Corcoran, Steven Harvey and Stephen Carey all got tries.

Four penalties by Eamon Ronan earned Sunday’s Well a 12-3 win away to Rainey Old Boys, while Midleton also won away from home with a 16-10 victory at Naas. Junior Sifa scored a try for the East cork side and Jamie Gogarty kicked two penalties and a conversion and Peter Broughan added a drop goal.