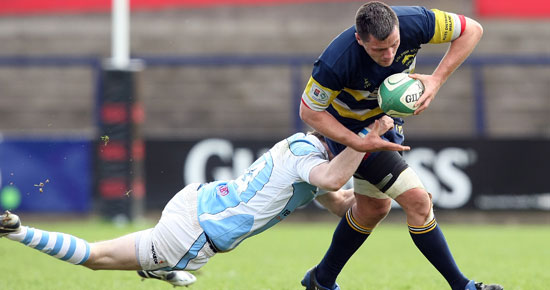 Munster sides occupy the top four places in the AIB All Ireland League with just one series of games remaining.

Cork Constitution are back in pole position after their last gasp 22-20 win over Old Belvedere at Anglesea Road. Con’ led 13-0 at half time with a try from Evan Ryan which Darragh Lyons converted and Jeremy Manning added two penalties. Lyons kicked a drop goal and Manning added another penalty to have the visitors leading 19-15 with time also up. Old Belvedere took the lead with a try from Marcus McAllister with a minute remaining but Manning struck with his fourth penalty with the final kick of the game.
Scorers Old Belvedere: K Hurrell, L Avua’a, M McAllister tries, C Keane 1 pen, 1 con.
Cork Constitution: E Ryan try, J Manning 4 pens, D Lyons 1 drp gl, 1 con.

Dolphin caused the big shock of the day when they defeated leaders Garryowen 14-9 at Musgrave Park. The home side got off to a dream start with a try from Rory Kenneally, but Garryowen dominated the opening half and with the advantage of the wind Conor Kilroy kicked three penalties to put them into a 9-5 lead at the break. Two penalties by Barry Keeshan put Dolphin in front and an excellent drop goal by Denis McCarthy made sure of the points for the home side.
Scorers Dolphin: R Kenneally try, B Keeshan 2 pens, D McCarthy 1 drp gl.
Garryowen: C Kilroy 3 pens.

Shannon won the Limerick local derby with a 12-6 victory over U.L. Bohemian at Annacotty and moved into third place, but the bonus point that U.L. earned made sure of their place in the top eight for next season.
Mark Butler had the home side 6-0 ahead at half time with two penalties but two tries by Fionn McLoughlin and a conversion by Tadgh Bennett secured the points for Shannon.
Scorers U.L. Bohemian: M Butler 2 pens.
Shannon: F McLoughlin 2 tries, T Bennett 1 con.

Young Munster kept their hopes of playing in the First Division next season alive with a deserved 18-0 win over Buccaneers at Dubarry Park. Clem Casey opened the scoring with a try for the visitors on thirty one minutes and two penalties by Mark Connolly had the Cookies 11-0 ahead at the interval. Mark McHugh increased the lead with a try early in the second half and Connolly converted.
Munster’s must now win their final game away to U.C.D. next week to retain their status in the top flight.
Scorers Young Munster: C Casey, M McHugh tries, M Connolly 2 pens, 1 con.

U.C.C remain on top in the Second Division on points difference from Lansdowne after they had to battle hard to overcome Thomond at the Mardyke on a 16-10 scoreline.
Gavin Dunne put the students ahead with a penalty, but a try by Warren Kelly converted by Declan Cusack had the Limerick side 7-3 ahead at the break. Tries by Ian Nagle and Stephen Archer and a second penalty by Dunne made sure of victory for the College. Cusack kicked a penalty for Thomond to secure a valuable bonus point in their bid to avoid relegation.
Scorers U.C.C.: I Nagle S Archer tries, G Dunne 2 pens.
Thomond: W Kelly try, D Cusack 1 con, 1 pen.

Old Crescent’s hopes of making the top four received a set back when they lost at home to Highfield 15-12. Brian O’Shea kicked four penalties for the home side and Highfield replied with tries from Anthony McGettigan and David O’Hea with Nick Wakely kicking a penalty and conversion.
Scorers Old Crescent: B O’Shea 4 pens.
Highfield: A McGettigan and D O’Hea tries, N Wakely 1 con, 1 pen.

Highfield’s game with Ballynahinch on Easter Monday has been cancelled.

Sunday’s Well now look like they will have to beat the Junior side that finishes runners up in the Provincial League Championship in a play off if they are to retain their Senior status after their 19-3 defeat by Suttonians.
Chris Burnett kicked a penalty for the Well to make it 7-3, having trailed 7-0 at half time, but two second half tries saw the Dublin side pick up the points.
Scorers Suttonians:D Mulligan, D Higgins, P Maguire tries, T Taipei 2 cons,
Sunday’s Well: C Burnett 1 pen.

In the All Ireland Provincial League Cashel’s hopes of winning the competition were dashed at the Spafield, when they lost at home to Navan 20-6. The sides were level 6-6 at half time with Pat O’Connor kicking two penalties for the Tipperary side.

In the other tie City of Derry were 33-3 home winners over Monivea and collected maximum points to set up a crucial tie next Saturday away to Cashel.