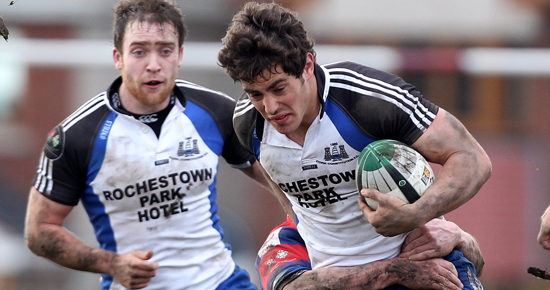 It is going to be a Cork v Dublin AIB All Ireland League final after the final series of games were completed at the weekend.

Cork Constitution finished top Of Division 1A as a result of their 23-13 home win over Dolphin. These sides must face each other again next week at Temple Hill in the semi final.
Con’ were never in trouble as they build up a 20-3 lead at half time. Cronan Healy, Tom Gleeson and Duncan Williams scored tries for the home side and Scott Deasy kicked two penalties and a conversion. Sam Cronin replied with a try for Dolphin and Barry Keeshan kicked a conversion and two penalties.

Shannon hopes of making the play offs were dashed at Coonagh when in front of a large crowd Garryowen defeated them 9-8 and ended Shannon’s hopes of retaining their title.
Mossy Lawlor opened the scoring with a penalty for Shannon but two penalties by Gerry Hurley had the visitors 6-3 ahead at half time.
A minute into the second half Hurley extended his side’s advantage with a third penalty. Shannon hit back immediately with a try from Paddy Butler, but Lawlor’s conversion into the swirling wind went wide of the target.

Relegated U.L. Bohemian finished their campaign with a 36 -18 away defeat by Blackrock College. Dave Moloney scored two tries for the Limerick side and Fergal Lawlor added two penalties and a conversion.

Old Belvedere booked their place in the semi finals with a 48-3 away victory over a disappointing U.C.C. side at the Mardyke. Ronan O’Sullivan kicked a first half penalty for the students.

Young Munster who were in with an outside chance of a semi final place, lost away to Buccaneers 18-8, a result that kept the Connacht side in this Division for another season. Aaron Carroll scored a try for the visitors and Alan Kingsley added a drop goal.

Promoted Bruff finished off their program in Division Two with a 21-18 away win over Clonakilty. Alan Bourke and Adam White scored tries for the visitors and Brian Carroll added a try and two penalties. Darragh Lynch and John O’Donnell replied with tries for Clonakilty and Keith Morath kicked two penalties and a conversion.

Relegated Highfield finished their program with a 16-7 home win over Old Crescent. Brian O’Hea and Dave Kelly scored tries for the home side, Colin Mahony kicked a penalty and Brendan Ronan added a drop goal. The visitors had earlier taken a 7-0 lead with a try from Billy Leahy and a conversion by Brian O’Shea.

Thomond finished up their season with a 35-17 home win over Terenure College. Warren Kelly scored two tries for the winners and John Sheehan, Michael Long and Darragh O’Neill got one each. Declan Cusack kicked two conversions, drop goal and a penalty.

In the Third Division Midleton will have home advantage against Nenagh Ormond in the play offs. Both were in Dublin and both won. Midleton defeated Suttonians 16-15 and Nenagh were 23-21 winners over Wanderers.

Sunday’s Well collected maximum points with a 32-14 home win over Instonians, but it was not enough to guarantee them a play off place as Banbridge picked up maximum points with a 27-21 home win over Navan to finish in fourth place.
James Mulcahy, Eamon Murphy, Michael Moynihan and Alan Long were try scorers for the ‘Well and Eamon Ronan kicked two penalties and three conversions.