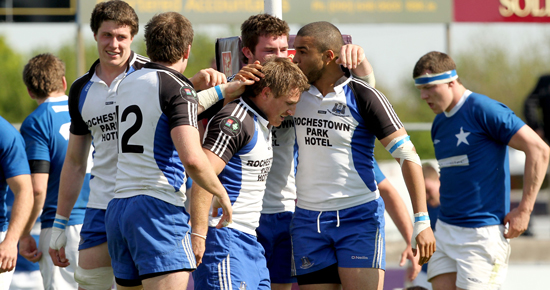 Victory for Cork Constitution in the final of the AIB All Ireland League Division 1 but no joy for Bruff or Nenagh Ormond in their respective finals.

The Cork side were deserving winners but were rocked by a Mary’s try in the eighth minute of injury time by Shaun McCarthy and Gavin Dunne’s expertly conversion sent the game into extra time.

St. Mary’s dominated possession and territory in the opening half but a Jeremy Manning penalty had the Division 1 leaders 3-0 ahead at half time.

Dunne levelled with a penalty shortly after the break but Manning who was only cleared to play twenty four hours before the final got in for a try by the posts which Richard lane converted.

Than came the drama as Mary’s laid siege to the Con’ line and despite heroic defending the line was eventually breached by McCarthy.

However Con’s experience in extra time told as they turned over ball in mid field in the first period of extra time and a move involving Peter O’Mahony, skipper Evan Ryan and Manning saw winger Cronan Healy produce another superb try as he skipped his way through the Mary’s defence to score and Manning converted.

There was to be no come back by the Dubliners this time and the trophy headed south for the fourth time.

Bruff 10, Lansdowne 17.
A gutsy performance by Bruff was not enough for the Co. Limerick side to lift the Second Division League title at Anglesea Road.
Indeed having suffered a heavy defeat in their league encounter earlier in the season, the signs did not look good for Bruff as

Lansdowne went into a 7-0 lead after four minutes with a try from Matthew Healy which Andrew Geraghty converted.

A bad clearance out of defence by Lansdowne allowed Bruff winger John Moore to touch down on fifteen minutes. A try by David Hewitt on the stroke of half time converted by Geraghty left Lansdowne 14-5 ahead at the break.

Geraghty extended the Dubliners lead with a penalty on 53 minutes, but Bruff produced the try of the match when Pat Thompson touched down with twenty minutes remaining.

The Limerick side tried everything to get an equalising sore as they dominated the final quarter but indiscipline was to cost them dearly during this period and Lansdowne held out for victory.

Nenagh Ormond 16, Queens University 17.
Nenagh came very close to winning their first senior trophy at Anglesea Road in the Division 3 League final, only for Queens to snatch victory with a try a minute from time.

An intercept by Michael Piper after fifteen minutes, saw the Queens out half race sixty meters to touch down for a 5-0 lead after seventeen minutes.

David Delaney opened Nenagh’s account with a penalty on 26 minutes and the Tipperary side went ahead two minutes later with a try from David Walsh, after the Belfast side failed to clear their lines following a Delaney penalty. The Nenagh out half converted for a 10-5 lead which they held to half time.

Queens were back in font on 53 minutes when Mark Sampson touched down for his side’s second try and Ian Porter converted.

Two Penalties by Delaney but the Tipperary side back in front with eighteen minutes remaining.

Great defending by Nenagh looked like repelling everything the Ulster side tried, but a minute from time Chris Quinn got in for the match scoring try.

Delaney did have an opportunity with a drop goal effort in injury time but it missed the target and so with it went Nenagh’s dreams of glory.