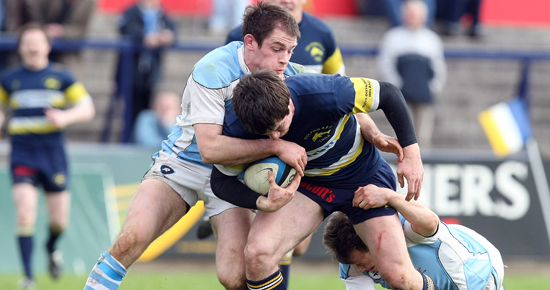 Old cup rivals Cork Constitution and Garryowen qualified for the final with away wins.

At Eaton Park Ballymena, Cork Constitution defeated the home side 18-9.

Davis O’Hara opened the scoring with a penalty for Ballymena after seventeen minutes with a penalty. Four minutes before the break in their first attack, Cork Constitution went ahead with a well worked try by Richard Lane.

The visitors took complete control in the second half. Gareth Murray extended Con’s lead with a second try which Scot Deasy converted.

A Deasy penalty made it 15-3 but O’Hara kept Ballymena in touch with two penalties and Deasy completed the scoring with a second penalty thirteen minutes from time.

A very disappointing performance from Dolphin saw them lose to Garryowen at Musgrave Park 16-6.

The Dooradoyle side never left Dolphin settle into their game and their half back pairing of Conor Murray and man of the match Willie Staunton controlled the game through out.

Dolphin skipper Barry Keeshan gave his side an early lead with a penalty, but Conor Murray had the sides level on the quarter hour mark.

The game was decided at the start of the second quarter when Keeshan knocked on inside his own Twenty Two and the up coming Garryowen pack got the ball out to Staunton who barged over for a try and Murray converted.

On twenty six minutes Staunton landed a drop goal from the half way line to extend Garryowen’s lead and a drop goal by Keeshan left the score at 13-6 in favour of the Dooradoyle side at half time.

The home side did up the ante in the final ten minutes. A kick ahead by Denis McCarthy saw replacement winger Niall O’Driscoll sprint up the wing but his pass to McCarthy saw the full back being stopped short of the line.

A scrum five metres from the Garryowen line saw Dolphin push the visiting pack back but referee Jonathan Peak ordered another scrum to Dolphin to the disbelief of the home fans. Garryowen won this scrum and kicked the ball up field and played out the remaining minutes in the Dolphin half.

With the sides due to meet again in the league in two weeks time this win will have given Dolphin a great boost.

News from around the Clubs – 13th December