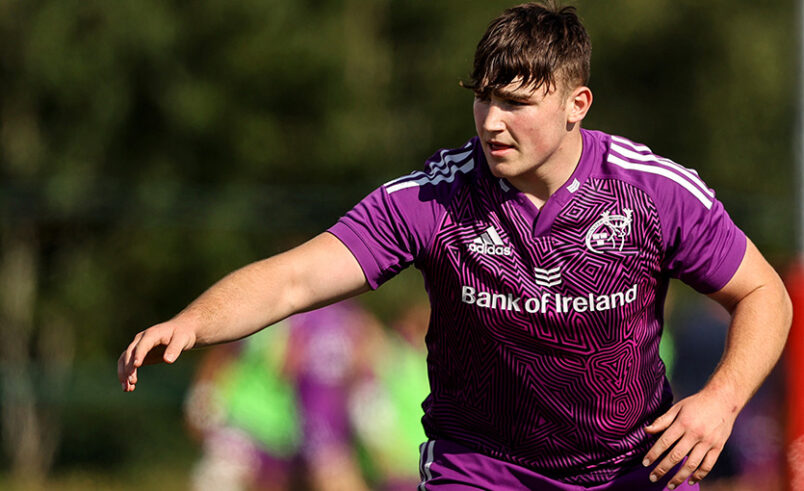 The Munster Development side to face Leinster A at the UL 4G pitch on Saturday at 3pm has been named.

Academy prop Mark Donnelly starts in the front row where he is joined by UL Bohemian’s Conall Henchy and Shannon’s Luke Rigney who is currently on a training contract. Henchy captained Crescent College Comprehensive to the Pinergy Munster Schools Senior Cup title earlier this year.

Senior second-row Eoin O’Connor starts in the engine room alongside Hurley who captains the side.

UCC’s Sean Edogbo starts in the back-row where he is joined by the Academy’s Ruadhan Quinn and Garryowen’s Brian Gleeson, a former Thurles and Rockwell man. Edogbo was on the successful Cobh Pirates side who won the Bank of Ireland Munster Rugby Club U18 Boys Cup in April.

Cashel’s Fearghail O’Donoghue provides the second-row cover while Cork Constitution’s Jack Kelleher is also named among the forward replacements. O’Donoghue featured for the Ireland U20s earlier this year while Kelleher is a former PBC and UCC player.

Old Crescent’s Jamie Duggan and UCD’s Jeff Williams provide back-up at scrum-half and out-half. Duggan and Williams both lined out in the 2021/22 Munster Schools Senior Cup with Crescent College and Bandon Grammar, respectively.