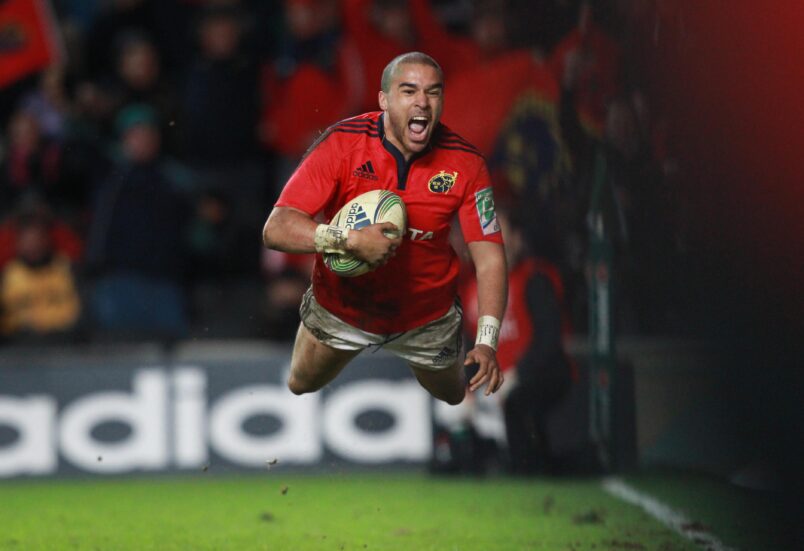 Simon Zebo dives over to score against Northampton in 2012. Inpho

Munster have been drawn to face Stade Toulousain and Northampton Saints in the 2022/23 Champions Cup.

An announcement of exact dates, venues, kick-off times and TV coverage will follow from the EPCR as soon as practicable.

Get the lowdown on our opponents below.

Toulouse are very familiar opponents with Munster having faced the French giants on eight previous occasions in the Champions Cup.

Of the eight previous meetings, Munster have won four, lost three and drawn one game, the 2022 quarter-final that saw the province exit the competition on place-kicks.

Last season saw Toulouse knocked out of the Champions Cup at the semi-final stage as Leinster proved too strong at the Aviva Stadium.

A fourth-placed finish in the Top14 earned a home quarter-final against La Rochelle with the hosts securing a 33-28 victory.

They bowed out at the semi-final stage to Castres Olympique, losing 24-18 at Stade Pierre Fabre.

Among their new signings ahead of next season are France full-back Melvyn Jaminet, Italy full-back Ange Capuozzo and La Rochelle scrum-half Arthur Retiere, scorer of the match-winning try-scorer in this year’s Champions Cup final.

Munster and Northampton have met on six previous occasions in the Champions Cup with Munster winning four times and losing twice.

Northampton famously beat Munster in the final back in 2000 with the sides not meeting again until 2009/10.

Munster lost at Franklin’s Gardens but won at Thomond Park with the sides drawn to face each other again in the quarter-finals as Munster prevailed once more in Limerick.

The most recent games between the clubs took place in the 2011/12 campaign with Munster winning home and away. Northampton’s home fixture was moved to Stadium MK in Milton Keynes to accommodate more supporters.

The Saints finished four in the Premiership last season and were beaten 27-14 by eventual champions Leicester Tigers in their semi-final at Welford Road.

They exited the Champions Cup at the Pool stages after defeats to Racing 92 and Ulster.

There will be changes to their coaching team for the coming season as Phil Dowson moves from Forwards Coach to Director of Rugby and Sam Vesty is promoted from Attack Coach to Head Coach.

New Zealander Chris Boyd, who had been the Director of Rugby, moves to an advisory role.

Ireland Team For 1st Test Against All Blacks