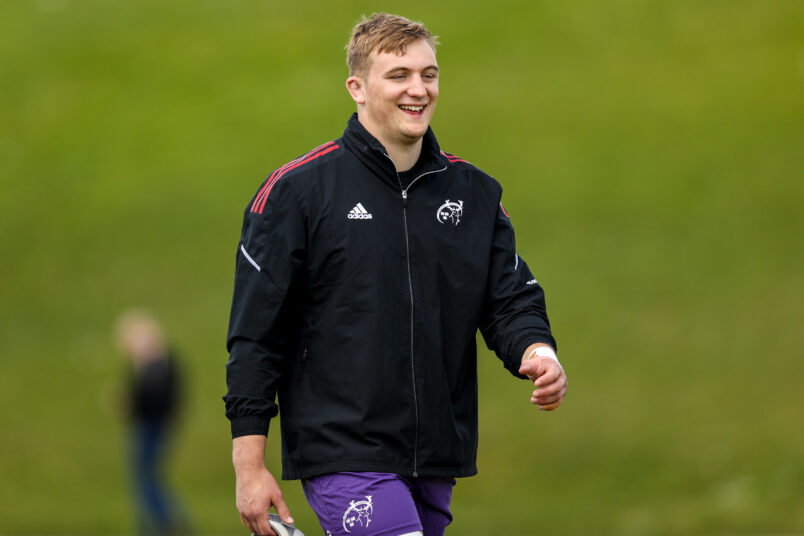 Gavin Coombes is one of 8 Munster players selected. Inpho

Johnny Sexton will captain the squad in what will be Ireland’s first tour since the 2018 series win over Australia. Ireland will play three Test matches against New Zealand in Auckland, Dunedin and Wellington as well as two fixtures against the Māori All Blacks in Hamilton ahead of the first Test and in Wellington following the second Test.

Robert Baloucoune, Andrew Conway, Chris Farrell and Ronan Kelleher have been ruled out of the tour through injury.

Andy Farrell commented, “This is the start of our Rugby World Cup campaign and it is going to be a fantastic challenge for our group facing five massive tests across the three weeks.

Due to Covid we haven’t had an opportunity to tour and touring plays a massive role in teams gelling together and building cohesion on and off the field. This group could also be the last to play a Test series in New Zealand which makes it even more special.

We will learn so much about the players and the group as a whole as we have to front up for five incredibly tough fixtures, far from the comforts of home and in grounds where the home support will greatly outnumber travelling Irish fans.”

Connacht’s Senior Coach Peter Wilkins will join the national coaching group for the duration of the tour to assist in team preparation.

Mick Kearney has been re-appointed as Men’s National Team Manager following Gerard Carmody’s promotion to IRFU Director of Operations.   Mick previously held the position between 2012 and 2016 and will fulfil the role through to the end of the Rugby World Cup in France.  Geraldine Armstrong, will lead team operations for the tour to New Zealand while Gerard Carmody will continue to support team operations and planning for RWC23.