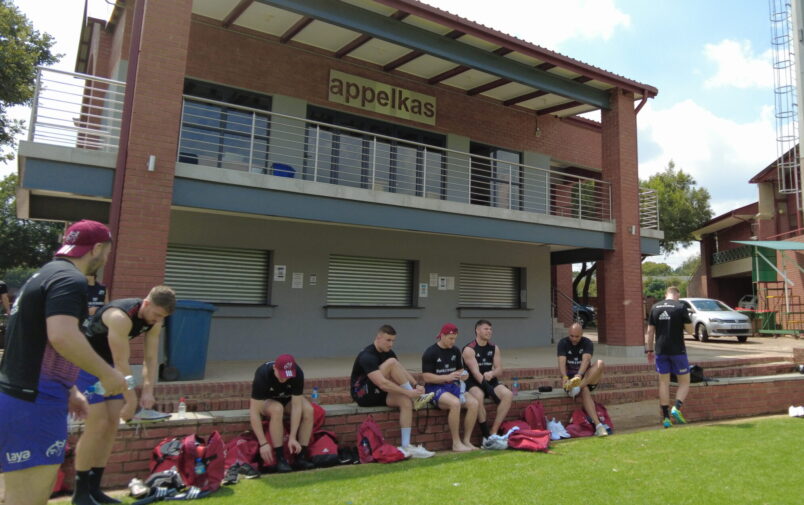 The players gather at Affies School in Pretoria for training.

The Munster squad continue their preparations in Pretoria for the next round of South African opposition in the URC with the province facing the Emirates Lions on Saturday at Emirates Airline Park in Johannesburg (12pm Irish time/2pm local time).

Following Saturday’s game against the Vodacom Bulls at Loftus Versfeld, Diarmuid Barron is following return to play protocols after coming off in the final minute of the game for a head injury assessment.

Meanwhile back at the High Performance Centre in UL, Jason Jenkins will increase his training load this week as he continues his rehabilitation from an abdomen injury.

Prop James French underwent a minor procedure on his knee last week and is expected to rehab with the medical team for approximately six weeks.

With nine players away with the Ireland Six Nations squad, the province had six representatives involved in Saturday’s victory against England at Twickenham. Tadhg Beirne, Andrew Conway and Peter O’Mahony all started with Dave Kilcoyne, Conor Murray and Joey Carbery featuring from the bench.

While on the Ireland U20s front the Greencore Academy trio of Patrick Campbell, Ethan Coughlan and Tony Butler were part of a memorable night in Barnet as the young Irish side overcame the reigning U20 Six Nations champions to set up a Grand Slam decider against Scotland next Sunday in Musgrave Park at 5pm. Buy tickets online here.

Two euros from each ticket sold for the game will be donated to UNICEF in support of their humanitarian efforts working with children in Ukraine.