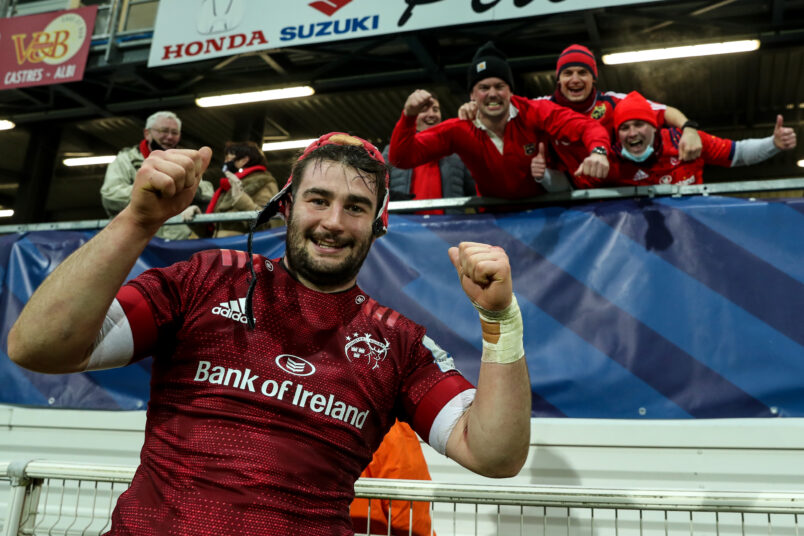 John Hodnett is one of 19 players to make their Champions Cup debuts this season. Inpho

As we approach the midway point of the season, take a look at the stats and best pics from Munster Rugby’s 2021/22 campaign so far.

Johann van Graan’s side have recorded 10 wins in 12 games. The province won all four games in the Champions Cup to qualify for a round of 16 clash against Exeter over two legs in April. See full details here.

Munster are fifth in the URC with games in hand of three of the top four. See the table here.

Munster are third in the Irish Shield, nine points ahead of Connacht, one point behind Leinster and seven points behind Ulster. Munster have two games in hand of Connacht and Ulster.

Video | Action From The Season So Far

There have been 19 appearances for Academy players with Alex Kendellen featuring in six of Munster’s 11 games so far this season.

Munster have conceded just 13 tries in the URC so far this season, no side has conceded fewer.

Of the clubs to have played all four fixtures in the Champions Cup Pool stages, no team has conceded fewer than Munster (five).

There have been debuts for 14 players this season, including eight Greencore Munster Rugby Academy members.

There have been Champions Cup debuts for 19 players. All of the players above, other than Osborne, made their first appearances in the Champions Cup along with Diarmuid Barron, Jack Crowley, John Hodnett, Alex Kendellen, Keynan Knox and Roman Salanoa.

Ben Healy is the top points scorer with 53 points and Jack O’Donoghue leads the way on tries with five.

O’Donoghue has also made the most appearances, featuring in 11 of our 12 games and making nine starts. He has played 674 minutes.

Mike Haley has made the most metres with 511 in his seven starts with Gavin Coombes leading the way in carries with 117 in eight appearances.

Rory Scannell and Jack O’Donoghue have earned their 150th Munster caps with O’Donoghue becoming the youngest player to reach the landmark.

Jean Kleyn made his 100th appearance away to Zebre last weekend.

Simon Zebo overtook Anthony Foley to become Munster’s record try-scorer in the Champions Cup after his double against Wasps.

Jack O’Donoghue was included in the initial longlist for European Player of the Year after the Pool stages with two tries in three appearances for the Waterford man.