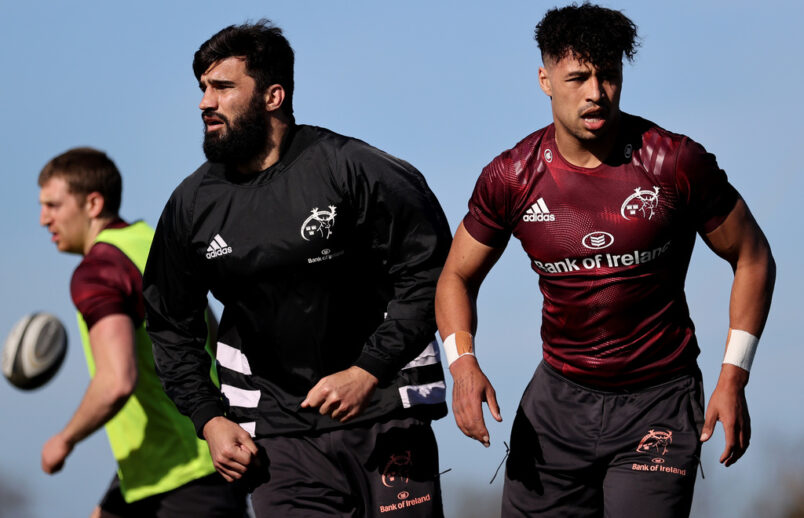 Conor Phillips has impressed with the Ireland Sevens team. Inpho

It’s a big weekend for the Greencore Munster Rugby Academy with the Men’s AIL season kicking off.

Academy players and members of the NTS (National Talent Squad) missed out on the valuable opportunity to line out for their clubs last season due to the cancellation of the AIL.

We spoke to Academy Manager Ian Costello for the latest news from the HPC.

Players training and playing with their clubs…

“As soon as we knew who wasn’t going to be involved with the senior team and available for club action, we sat down and spoke with the clubs and there will be a lot of guys playing in the All Ireland League over the next three weeks.

“The next phase for the Academy players and NTS players is to transfer the work they’ve done over the last couple of months onto the pitch and give a good account of themselves.

“The exciting bit for us a coaching group is we get to split up and will watch them all play live over the weekends.

“Our analyst Elliot Corcoran will cut that footage and it adds to that knowledge base that we have on players.

“There are a few things that are tricky logistically, they have to come out of the bubble for a number of days but the IRFU have accommodated that so hopefully we’ll see a number of Academy players playing for their clubs right across the country this weekend.

“Everyone is really excited and we really understand the value of these lads playing in very competitive club games and how important that is to their long-term development on and off the pitch.

Young players in action for the Munster Development XV…

“With so many guys out of rugby for so long because of the gap with Covid, we made the decision to run a residential camp in UL with our U20s and some late developers.

“We had a very enjoyable and successful programme there for a couple of months and on the back of that we had a game against the Leinster U20s and had a really good win in UL.

“We then had a couple of internal games against our U19s because, frustratingly, we had some other games called off due to Covid.

“It was great for that squad to continue, supplemented by some of the Academy players, into a development game against Ulster and that was an excellent win up in Dublin.

“Last weekend against Leinster a few more Academy players came in along with some of the young senior players who came in for game-time, which is the beauty of those development games.

“Unfortunately, that was a very frustrating game where we struggled. It was the opposite to the Ulster game, where we started very well, and quickly found ourselves 14-0 down.

“It was a disappointing end to the programme but it was a very enjoyable and successful three months.

“The beauty of that is hopefully we have identified the next layer of talent and the majority of those players will populate our NTS (National Talent Squad) programme and populate our Academy going forward, and that was the main aim of that programme.

“We learned a lot about the players and have set ourselves up nicely for the next 12 months.”

“He had an excellent pre-season here and looked really sharp. He played really well in an internal game here which was good for him and good for his confidence and he carried that into the Sevens World Series.

“He featured very strongly for Ireland across the two weekends, scoring six tries. Feedback has been really positive from the staff there and from Conor himself so great to see him carry that form from the summer into those tournaments.

“Hopefully his status is raised this year because I think it’s fair to say he was more peripheral when he was with the Ireland Sevens team last year, which is difficult when you’re away from home and not as centrally involved in all the big matches.

“His goal is to be involved in the big games and the big weekends and I think that makes being away from home and in camp for such a long periods, and travelling for such long periods – it makes that far more enjoyable if the reward is there at the end of the weekend and he gets to perform on the big stage so really good for him all round.”