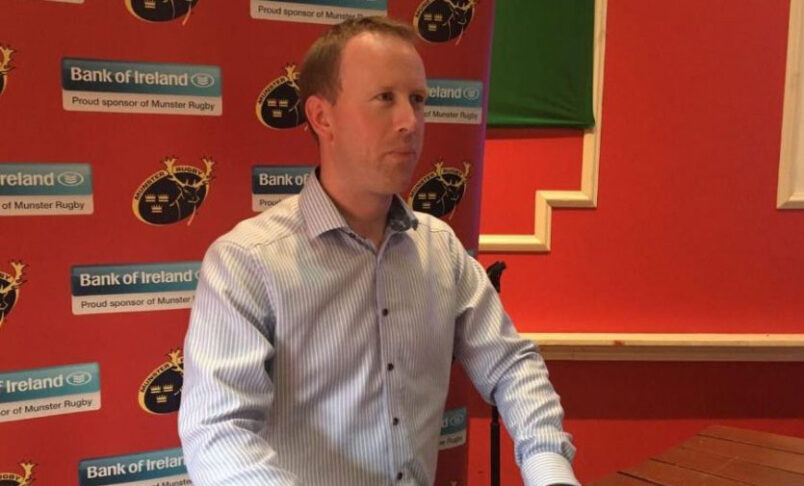 Quinn provided information on stadium upgrades to Thomond Park and Musgrave Park, the latest status on the planned Cork Centre of Excellence for Musgrave Park, the benefits obtained from the stadium’s artificial surface throughout the pandemic and plans for the return of supporters.

“One of the things we’ve had to look at over the last couple of years is our floodlights in both Musgrave Park and Thomond Park and they are coming to end-of-life. They have both been in place for a long, long time at this stage. We’ve started the project in Thomond Park to upgrade our floodlights in conjunction with SBE Electrical. The project started as soon as the last game was played so we’ve to take down all the lights on all the masts and replace them with LED lights so there’s going to be energy savings and that will tie in with where we want to go in the sustainability side.

“But the big complication in Thomond is you have lights running across the top of both stands. They’re part of the floodlight system. Every single one of them has to be taken down and we’re actually changing the set-up slightly so that they are easier to replace and access in the future.

“In terms of Cork, we have a plan in place for next season to do the Cork lights. We have a Sports Capital Grant application gone in for this round of funding.

“We’re also working with the SEAI for a potential grant because again, the floodlights in Cork are run off the Mains but now they’re going to be LED instead of the old lights. Again, a big energy-saving around that. So Cork isn’t being left behind on that side.”

“In terms of the Centre of Excellence project, when we got our Large Scale Sports Infrastructure Grant last year, it was our intention to have it probably built at this stage, maybe wait for after the concerts in 2020 and start then. Obviously, that’s all been put back but it is still very much on the agenda for us. We are working through the financing of it. Covid has hit the financing but we’re still confident we’ll be able to find a way around that. Our current plan that we’re looking at is next year we will have concerts again in Musgrave Park.

“So we’re looking at starting it as soon as possible. It’s a critical part of our infrastructure and part of our long-term strategic goals for Munster. We need to have that training base for underage players based in the south and east of the province.

“It’s part of a bigger plan around Centres Of Excellence around the province. We’re in discussion with a number of other parties about potential other locations which may happen even faster than the Cork one depending on progress with those but we’ll come back on that in the next couple of months.”

“The usage in Cork over the last number of years has been fantastic since we put the artificial pitch in place. The funniest thing was that during the lockdown, when were in Level 3 and 4, where the kids were able to train, Musgrave Park was never busier. We had a local GAA club in for 15-20 hours a week, local soccer clubs using it, some of our own rugby clubs obviously in there as well but we actually were never busier during that period which was strange.

“If you’re in the middle of winter, you need a dry pitch and to provide that facility to the local clubs, we’re always saying that we want Musgrave Park to be like a municipal stadium. Rugby will always have priority but we want other sports in.

“We believe that’s the model for sport long-term in Ireland and following the model in other countries. It just backs up what we’ve been saying, we’re open for everything; whether it’s frisbee, whether it’s soccer, whether it’s GAA – all sports are welcome in Musgrave Park. I think we showed that quite well during the lockdown period.”

“The return of spectators to stadia is absolutely critical for us. It’s a massive positive to be looking at the test events that are happening out there now at the moment. Going back to last August for the Connacht preseason game where we had 200 supporters in. Even at that time, we thought we were making progress. Obviously, it all shut down after that. But even the effect of 200 people coming into the ground was brilliant. Playing the matches behind closed doors all season has been challenging. Financially is one but the impact on the team (as well).

“Financial is one side but it’s the actual atmosphere, it’s what we’re about in Munster. We’re about our supporters. Johann has said it numerous times throughout the year and without them, we’re a bit lost at times. So it’s great to see some test events now.

“We know it’s going to be limited capacity early in the year. It’s great to be selling season tickets on that basis. We’re confident we’ll be able to house all of our season ticket holders and 10-year ticket holders at our first few home games in Thomond Park and as I say just gearing up for that.

“Within our financial planning, we’ve said it, the start of 2022 is when we hope for a full Thomond Park to be back if the government continue the positive progress around vaccinations and everything, we’re confident that will be met. Just to have some light at the end of the tunnel now is fantastic.”