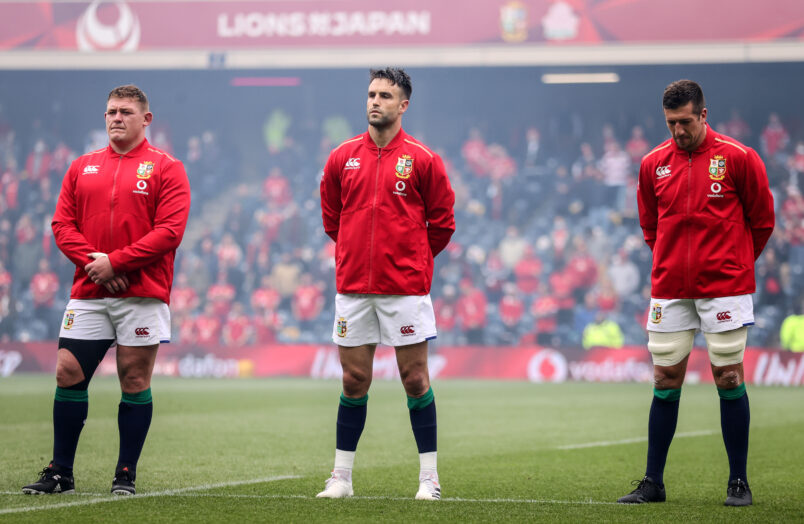 Conor Murray will captain the Lions in South Africa. Inpho

Conor Murray was honoured to be named as Tour Captain of the 2021 British and Irish Lions on Saturday night as the Munster scrum-half prepared to depart for his third tour with the side.

Murray and fellow Munster man Tadhg Beirne had helped the Lions to a convincing win over Japan in Murrayfield on Saturday with the unfortunate Alun Wyn Jones injuring his shoulder early in the match before later being ruled out of contention for the tour.

The Limerick man is a product of St Munchin’s College and has made 150 appearances for Munster, winning the Magners League in 2011, and been capped 89 times by Ireland.

He has won a Grand Slam and two 6 Nations titles at international level and helped the Lions to a series victory in Australia eight years ago and a drawn series in New Zealand in 2017.

He was named on World Rugby’s Team of the Decade (2010-2019) last year and the Lions captaincy is the latest in a long line of honours for the Patrickswell man. Hear his thoughts on being named captain below.

Can you sum up your feelings of being named Tour skipper, albeit in unfortunate circumstances?

“We’re very disappointed to lose Alun Wyn. He’s been brilliant for the first two weeks. I’ve known him from the past two Tours and he’s been incredible. It’s a huge loss.

“What kind of puts me at ease is that we’ve such a good leadership group that it means I can continue being myself. There’ll be a little bit more responsibility, but I don’t think it should change anything around the camp. I think that’s one of the most important things – that I remain myself, and I assume that’s why Warren asked me to do it.”

Were you surprised that Warren asked you?

“Yeah, a little bit to be honest. I didn’t even think about it. I knew that Al was out and then you just, you look around the squad and there’s so many contenders. It’s a huge honour, but there’s such a good group of leaders in this squad that it makes it less daunting, definitely. I think there’s lads that you can lean on.

“We’ve seen it even for the first two weeks, a few other players would start to lead or start by saying a few words before training, or whatever the message might be for the week. There’s a group there that know what we’re trying to do, and I think that’s going to be the most important thing.”

Any hesitation when he asked you, did you have to give it much thought?

“I didn’t think about long. I said, ‘absolutely, it’ll be a massive honour thank you very much for this opportunity’. So, no. Then you kind of think about how big it is and then obviously my phone has gone a bit crazy since it was announced.

“I know a lot of the lads here already, it’s a group that you can feed off. When it was announced I got a big round of applause and the boys were congratulating me. It (the group) feels really close.”

Who did you tell first?

“I tried to call my girlfriend Joanna, but her phone was on one percent as usual. Her phone was off, so my dad is in Edinburgh, he was out with his friends having a few drinks and so he was the first person. My mum’s in Kerry and I rang her, she’s down with a few friends who were watching today’s game and they’re celebrating too, so it still hasn’t sunk in to be honest.”

What qualities do you think are needed for the role and what do you think you’ve learned from previous Lions captains you’ve played under in the past?

“I think you got to definitely understand how we’re trying to play, what we’re trying to do on the pitch, that’s the most important thing. I think your messaging has to be well thought out, you know, I think, in my career I suppose when I do speak it’s thought out. You know, it might not be that often, but it’s definitely has meaning and there’s thought behind it, and a genuineness to it.”

Has Alun Wyn given you any words of advice yet or has he taken you aside to have a bit of a chat?

“He just came and said ‘congrats, and just be yourself’ and I think that’s really important. I think, you know, growing up, you probably thought you had to try and be a certain type of person to be a leader, but you just have to be yourself. I think once you have the respect of the group around you, I think that’s a massive plus, a massive thing that can calm you down a bit.

“If you have the respective of the lads and you do what you do and you do it honestly and then yeah I think it should be fine. And again, I keep coming back to it, but there’s various guys you can lean on in this squad. You know, it’s more of a group effort.”

Who’s in that leadership group that’ll you lean on?

I think Owen Farrell. There are lads like Robbie Henshaw who’s is a real big defensive leader for us. Lads who have captained their country. There’s massive experience there so you know it’ll definitely be a group thing. I’m going to enjoy it and again lean on those boys. It’ll take a bit of getting used to, but it’s such an honour.”